Texas Rangers prospect Ryan Rua: 17th round to the majors

Share All sharing options for: Texas Rangers prospect Ryan Rua: 17th round to the majors

Texas Rangers prospect Ryan Rua is one of the more intriguing September 2014 40-man roster promotions. He entered the campaign as a somewhat enigmatic prospect, but he's proven himself in the high minors this year and now has a chance to solidify his status with a strong September showing.

The Rangers farm system is renowned for a very promising group of toolsy players, many with large bonus checks either through the draft or from Latin American investments. Ryan Rua is not one of those guys. A 17th round pick from Lake Erie College in 2011, he was drafted for organizational depth purposes but immediately stood out for his performance, hitting .321/.395/.512 in 45 games in the Arizona Rookie League.

The problem there was age: he was 21, almost a full year older than the average league player, and it was wise to show some skepticism until he reproduced this at higher levels. He did, hitting .293/.368/.432 (wRC+130) for Spokane in the Northwest League in 2012. However, age was still an issue: the Northwest League is still short-season ball and he was now the same age as a college senior.

Rua is listed at 6-2, 205, born March 11, 1990. He showed good strike zone judgment in the low minors, but better conditioning and strength, plus some minor swing tweaks, added power to his game. Many observers were skeptical pre-season, but this year both Texas League and Pacific Coast League sources felt that Rua can be a decent major league hitter. He is not someone who will hit .300 but could hit .250-.260 with some power and a reasonable on-base percentage.

Defensively, his best position looks like second base, where he lacks range but is fairy reliable on routine plays. He is more error-prone at third and his tools are stretched there. He can also play left field and first base adequately, but his best defensive asset is simple versatility.

The Rangers have a lot of positional talent coming up behind Rua and he is not going to hold people like Joey Gallo or Nomar Mazara back. However, if he can make a good impression this month, it will help his chances to find a role as a decent bench player with some pop in his bat. And that's a nice thing to find in the 17th round. 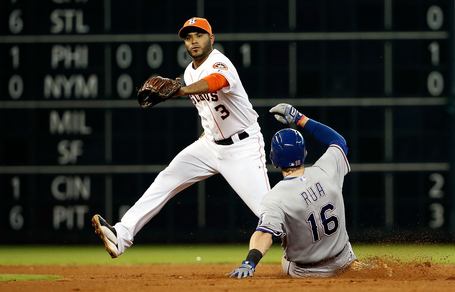