Baltimore Orioles first base prospect Christian Walker: what to expect

Share All sharing options for: Baltimore Orioles first base prospect Christian Walker: what to expect

The Baltimore Orioles promoted first baseman Christian Walker to the major league roster yesterday and he went 1-for-3 with a double in his big league debut. Walker emerged as one of the better first base prospects in baseball this year. Let's take a look.

Christian Walker played high school baseball in Pennsylvania, putting himself on the scouting radar by hitting 19 homers to win the 2009 prep home run derby, beating out Bryce Harper. Walker was firmly committed to the University of South Carolina Gamecocks, however, which dropped him to the 49th round. He could have gone as high as the third round if signable. 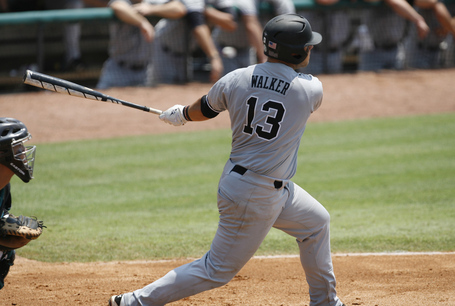 Christian Walker with the University of South Carolina, via Getty Images

Despite the outstanding performance for a top program, scouts weren't sure how his skills would translate to pro ball. His plate discipline and feel for hitting was very respected, but many scouts felt that his swing was too level to produce big home run power against advanced pitching. These doubts landed him in the fourth round in the '12 draft, selected by the Orioles.

Walker is listed at 6-0, 220, a right-handed hitter and thrower, born March 28, 1991. He's quite strong physically, but his swing mechanics and all-field hitting approach made him a gap hitter in his first full-time look at pro pitching last year. He made adjustments this season, pulling the ball for power and lofting it more frequently. 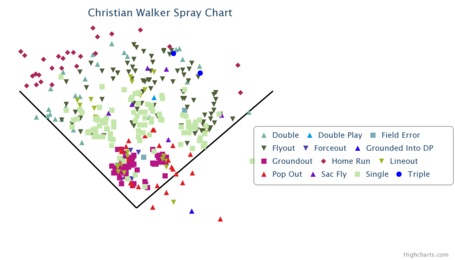 The tradeoff was a lower batting average and a sharp increase in his strikeout rate, from 17% last year to 24% this year. However, his walk rate was up slightly, resulting in no loss of on-base percentage. Holding steady with OBP while increasing home run power led to a strong boost in overall production, from 101 wOBA+ to 117 this year.

Defensively, Walker is a little error-prone at first base but has a decent arm and good-enough range. With more experience he'll rate as decently competent, but won't win gold gloves. He doesn't run well enough to play the outfield and won't steal bases.

Is Walker's power boost this year for real? I have liked him since his freshman year in college and I think his improvement this year is genuine. He usually needs some time to adapt to a new level, but in the medium and long-terms I expect him to be a productive hitter. Eventually I think this is a guy who can product major league numbers similar to his minor league numbers: .270-.280, 20-homer power, reasonable on-base percentage. He won't be Miguel Cabrera or Jose Abreu, but he should be somewhere between Lucas Duda and Matt Adams, and that has value in today's low-offense game.