We continue our farm system reviews this afternoon with the Texas Rangers. Remember, this is the PRE-SEASON list. This is not a new list. These are pre-season rankings and grades. This is a review of 2014, not a preview or new prospect list for 2015.

2) Michael Choice, OF: Grade B. Borderline B+. Hit .182/.250/.320 with nine homers, 21 walks, 69 strikeouts in 253 major league at-bats. Batting average/OBP are obviously disappointing, but he has nothing left to prove in the minors and it is logical to let him play in a lost season. Age 24. I’m not sure what will happen here.

3) Jorge Alfaro, C, Grade B: hit .261/.323/.440 with 17 homers, 29 walks, 123 strikeouts in 486 at-bats between High-A Myrtle Beach and Double-A Frisco, steady production at both levels. Power is developing although holes in his approach are obvious. Continues to show outstanding arm strength and mobility combined with a high number of passed balls and fielding miscues. Age 21. Could become a star, a Triple-A flameout, or anything in between.

It was a bad news/good news situation for the Rangers this year.

The bad news: the major league team was racked with injuries and ineffectiveness, currently sitting at 59-92. Rougned Odor held his own despite being rushed, but the fact that they had to rush him in that manner to begin with was indicative of the problems. Michael Choice couldn’t hit for average; Nick Martinez (another rush victim) went 3-11. It was clear pre-season that Texas had impressive high-ceiling prospect depth in the lower minors, but that the upper levels were thinner. The problems they encountered with roster depth when the injuries struck showed this. One bright note: despite some command issues, rookie Roman Mendez provided some decent relief innings sooner than anticipated. 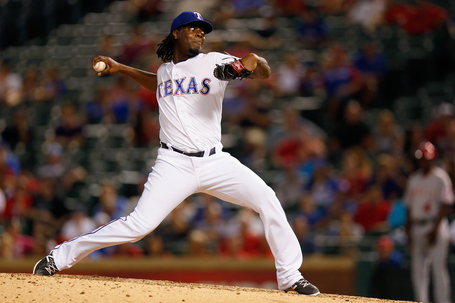 Down on the farm, the news was better, as much of the high-ceiling talent the Rangers had at the lower levels played very well and is percolating up the organization. Joey Gallo’s monstrous power season stands out, but Nomar Mazara’s breakout was also very impressive. Jorge Alfaro still has flaws but few catchers offer his upside. Ryan Rua doesn’t have the huge athletic talents that the Rangers love, but he’s a good solid player who can take a larger role in ’15. Nick Williams, Lewis Brinson, and Travis Demeritte all showed flashes but remain high-upside, high-risk bets.

I ranked the Rangers 10th overall on the pre-season farm system list, noting the large amount of high-risk, high-ceiling talent but also noting that some of that talent looked stagnant. I think that's still a fair assessment, although the development of Gallo and Mazara and the new additions to the organization should move them up a few notches.