We move forward with our farm system review series this afternoon with the St. Louis Cardinals. Remember, this is the PRE-SEASON list. This is not a new list. These are pre-season grades and rankings. This is a review of 2014, not a preview for 2015.

1) Oscar Taveras, OF, Grade A: Hit .318/.370/.502 in 239 at-bats for Triple-A Memphis, but has been unable to carry this to St. Louis yet, hitting .247/.285/.326 in 215 at-bats. Given the entirety of his track record and the fact that his strikeout rate remains acceptably low in the majors even without much production, I think he will figure it out eventually. But this is admittedly disappointing. Age 22.

16) Lee Stoppelman, LHP, Grade C+ Difficult season due to control issues, 5.47 ERA with 57/26 K/BB in 49 innings combined between Memphis and Springfield. Age 24, still effective against lefties and could slot into LOOGY role if command firms up.

A season of transition for the Cardinals prospect list: the 2015 rankings will look considerably different from this pre-season group. Wong, Martinez, and Taveras will graduate. None have quite met expectations, Taveras in particular, but given their track records we should sustain faith in all three. Much of the major league roster is home-grown of course, and the Cardinals also got some useful work out of rookie lefties Sam Freeman, Marco Gonzales, and Nick Greenwood, the latter a 14th round pick from 2009 who turned himself into a workable bullpen guy. Right-hander Sam Tuivaiala is another emerging arm. 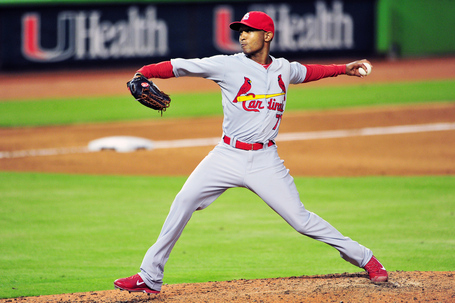 The system reloads pitching for 2015 with the development of Reyes and Kaminsky at the top. The 2014 draft brings in advanced right-hander Luke Weaver from Florida State and extremely promising right-hander Jack Flaherty (who ran up 1.59 ERA and 28/4 K/BB in rookie ball). Other arms to watch include former first round pick Tyrell Jenkins, who bounced back successfully from a shoulder injury, and ultra-command right-hander Nick Petree, who makes hitters look dumb despite an 88 MPH fastball.

Holdover prospects with rising stock on the hitting side include outfielder Rowan Wick and his 20 homers in 74 games between State College and Peoria, outfielder Charlie Tilson (.289/.333/.389 between High-A and Double-A) infielder Jacob Wilson (.305/.366/.519 at Springfield before going down with a knee injury), and infielder Juan Herrera (.274/.320/.364 with 27 steals for Peoria). Also keep track of right-hander Mike Mayers and reliever Dixon Llorens.

The Cardinals ranked sixth among farm systems pre-season. With some turnover and churning they will move down a few notches, but given their track record I imagine they will recover the stock value quickly.