This afternoon we continue our farm system review project with the Washington Nationals. Tomorrow we will examine the New York Yankees and Los Angeles Dodgers. Remember, this is the PRE-SEASON LIST. This is not a new list. These are pre-season grades and rankings. This is a review of 2014, not a preview of 2015. 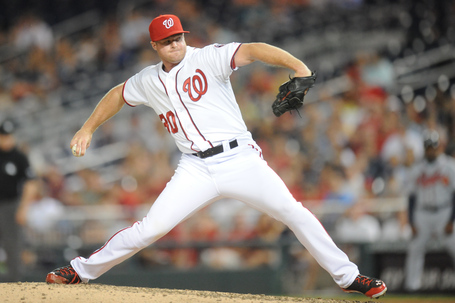 The most important news for the Nationals farm system in 2014: Lucas Giolito showed what he can do when he’s healthy. Other positives include valuable big league pitching contributions from Aaron Barrett and Blake Treinen, outstanding performance in the upper minors from outfield prospects Michael Taylor and Steven Souza, and the emergence of pitching prospect Austin Voth (rated as a sleeper pre-season, he posted a 2.77 ERA with a 133/38 K/BB in 127 innings at three levels) as one of the rapid risers from the 2013 draft.

22-year-old infielder Wilmer Difo had a fine season in Low-A, hitting .315/.360/.470 with 14 homers and 49 steals, taking some of the sting out of weak seasons from Randy Encarnacion and Osvaldo Abreu. Another positive came from toolsy outfielder Destin Hood, who has tempted scouts for years and finally came through with a .298/.348/.460 season between Syracuse and Harrisburg.

On the negative side, there were several key injuries as noted above. Brian Goodwin did not have a good season. Matt Purke has gone the opposite direction from Giolito with his health issues.

Pre-season, the farm system ranked slightly below average at number 22, clearly in a transitional phase. I think enough positive things occurred to move them up into the middle ranks, although we’ll have to see where things stand after full analysis of all systems during the winter.