Today we look at the Cleveland Indians as part of our process reviewing farm systems for 2014. Remember, this is the PRE-SEASON list. This is not a new list. These are pre-season grades and rankings. This is a review of 2014, not a preview of 2015.

How did the Indians farm system look pre-season?

The Indians received very useful pitching contributions in the rotation this year from rookies Trevor Bauer and T.J. House. 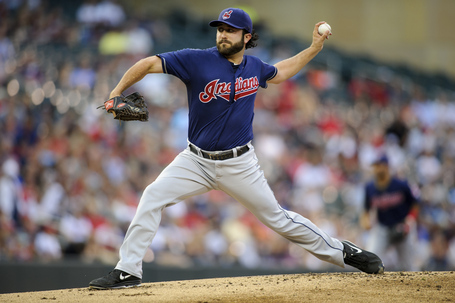 House (3.42 ERA in 16 starts, 73/21 K/BB in 92 innings) was the big surprise; he had fallen to Grade C status after a lackluster ’13 but took a large step forward this year and should be a useful four/five starter going forward. Another key rookie has been bullpen lefty Kyle Crockett, who went from the University of Virginia in 2013 to the majors in just over a year.

There were some disappointments on the farm, a promising group of toolsy infielders not living up to expectations, but more depth has been added and the ’15 list will look considerably different than this. A trade with the Cardinals brought in outfielder James Ramsey who should be ready to contribute next year. The June draft added college outfielders Bradley Zimmer and Mike Papi, highly promising prep lefty Justus Sheffield, and high school first baseman Bobby Bradley, who provided an electric .361/.426/.652 line in rookie ball.

Infielders Erik Gonzalez and Giovanny Urshela had good years in the high minors and could contribute next season in the majors. Right-hander Mitch Brown had a nice rebound season in the Midwest League after a shaky ’13 and is still just 20 years old.

Overall, this system needs more impact talent but has more depth in C+ types than some teams, and sometimes those guys will surprise you.