More prospect review work today, with the Colorado Rockies organization. Remember, this is the PRE-SEASON list. This is not a new list. These are pre-season rankings and grades. This is a review of 2014, not a preview for 2015.

5) Tom Murphy, C, Grade B: Borderline B+. Limited to 27 games for Tulsa by shoulder problems. Hit .213/.321/.415 with five homers in 94 at-bats. Power and walks still here, sample too small to mean much otherwise given health questions.

11) Tyler Matzek, LHP, Grade C+: Last year a scout told me that Matzek’s stuff was every bit as good as Gray’s and Butler’s and, in a way, more special because it comes from the left side. The difference-maker of course is command consistency, which they have and Matzek does not. Results: 4.23 ERA in 106 big league innings, with 77/40 K/BB and 105 hits allowed. That is very credible given the context. His command is still wobbly but it is much improved compared to two year ago and at times he’s been flat-out brilliant. 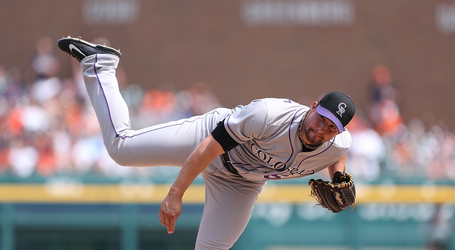 In some senses it has been a good year for the farm system. Tyler Matzek’s minor league career was dubiously erratic, but he’s made huge progress this year and has held his own in the Show. Recent farm products like sophomores Nolan Arenado, Corey Dickerson, and Charlie Blackmon have held down key roles, though they had too much experience to rate on a pre-season ’14 prospect list.

On the negative side, Chad Bettis wasn’t able to solidify a spot. Kyle Parker didn’t make a huge impression in the friendly Pacific Coast League. Eddie Butler fought injuries and wasn’t as dominant as last year. Jon Gray was solid but not always spectacular in Double-A and ended the year on the DL. Winkler got hurt, and now Tyler Anderson may be hurt too. Pitching depth is a great thing because it can evaporate so very quickly.

Positionally, David Dahl, Ryan McMahon, Raimel Tapia, and first baseman Correlle Prime all had good-looking seasons on the surface, but all need to prove themselves outside of Low-A. Asheville is tricky; even when you think you’ve adjusted for it, you probably haven’t adjusted enough. The 2014 draft brought in lefty Kyle Freeland and second baseman Forrest Wall, both capable of advancing very quickly. Products of the Latin American program like right-handers Antonio Senzatela and Rayan Gonzalez are also moving up the ladder.

I felt this farm system was underrated pre-season. I’m not sure what I think now; we’ll have to see how the health reports stack up this winter. It would remain solid if everyone is healthy.