Moving forward with our farm system reviews, we turn to the Los Angeles Angels. Remember, this is the PRE-SEASON LIST. This is not a new list. These are pre-season grades and rankings. This is a review of 2014, not a preview of 2015.

1) Taylor Lindsey, 2B, Grade B: Borderline B-. Traded to San Diego Padres in the Huston Street deal. Hit .238/.306/.372 in 449 at-bats in the Pacific Coast League between Salt Lake and El Paso. This was a disappointing season.

7) R.J. Alvarez, RHP, Grade C+: Traded to Padres in Street deal, 1.25 ERA with 61/13 K/BB in 43 innings in the Texas League. Very effective, looks to take hold of a major league bullpen job sooner rather than later.

8) Jose Rondon, SS, Grade C+: Another guy sent to San Diego, Rondon hit .315/.363/.404 with 13 steals in 441 at-bats in the California League between Inland Empire and Lake Elsinore. He lacks power but hits for average and has a good defensive reputation.

20) Matt Shoemaker, RHP, Grade C: Shoemaker doesn’t get much press and is old for a prospect at age 27, but he can eat innings, throws strikes, has survived pitching in Salt Lake, and made a point by throwing five shutout innings in his big league debut last September. Would be in the mix as a fifth starter for many teams, which is not bad for a guy who was an undrafted free agent. He took his sleeper potential and turned it into production with an excellent major league rookie season, going 15-4, 3.16 with a 119/24 K/BB in 128 innings. 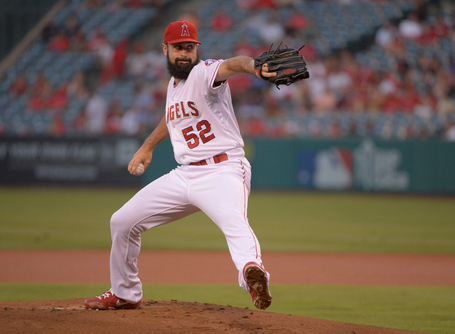 What a strange year for the Angels farm system, in both good ways and bad ways.

On the bad side, several players had disappointing seasons and have seen their stock drop, Kaleb Cowart most notably. Trades have churned the system and the 2015 list is going to look much different than this pre-season list.

On the other hand, the Angels have gotten valuable contributions from rookies C. J. Cron and Matt Morin, plus an outstanding campaign from Matt Shoemaker, a 27-year-old Grade C prospect who was signed as an undrafted free agent back in 2008. He found pitching in the majors to actually be easier than pitching in Salt Lake.

Looking ahead to 2015, new additions to the list will include 2014 first-rounder lefty Sean Newcomb, second round right-hander Joe Gatto, third round right-hander Chris Ellis, and fourth round right-hander Jeremy Rhoades. Holdover prospects Trevor Gott, Kyle McGowin, Drew Rucinski,and Victor Alcantara give a quartet of promising right-handed arms who have seen their stock increase. Lefty Nate Smith from the 2013 draft also had a good season.

The strength of the system looks to be pitching at his point. More impact bats would be helpful.