We continue our farm system review project today with the San Diego Padres. The next team we will examine will be the Los Angeles Angels. Remember, this is the PRE-SEASON LIST. This is not a new list. These are pre-season grades and rankings. This is a review of 2014, not a preview of 2015.

1) Austin Hedges, C, Grade B+: Hit.225/.268/.321 in 457 PA For Double-A San Antonio, wRC+67. Threw out 38% of runners. Reports on his defense remain strong but his hitting is terrible, completely overmatched by Double-A pitching. Young enough to improve but his grade will have to be lowered until he hits more effectively.

8) Keyvius Sampson, RHP, Grade B-: Undone by command troubles in Triple-A, 6.68 ERA with 94/68 K/BB in 92 innings for El Paso, 91 hits. Ineffective as both a starter and reliever. Very disappointing.

It has been a difficult year for the Padres at the major league level and there have been some glitches on the farm as well, with Max Fried’s elbow, Casey Kelly’s slow recovery from his own Tommy John, Burch Smith’s forearm troubles, and Keyvius Sampson’s loss of command putting a damper on the pitching depth that looked so good pre-season. On the other hand, Jesse Hahn was strong in his major league trial, and the Padres got an unexpectedly fine contribution from Cuban defector Odrisamer Despaigne, who signed a month after I posted the original list. 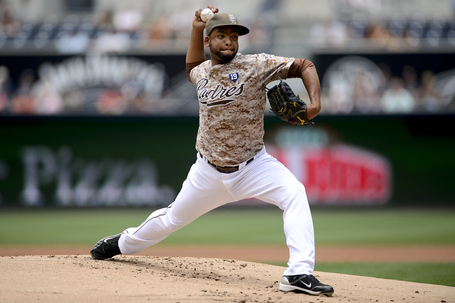 The Padres did add depth to the system over the spring and summer. 2014 first round pick Trea Turner was outstanding in his pro debut, hitting .369/.447/.529 in 46 games in Low-A. He should move rapidly with a shortstop bat like that. Second round pick Michael Gettys hit .310/.353/.437 in rookie ball. The Huston Street trade with the Angels brought in a pair of promising infielders, shortstop Jose Rondon (.315/.363/.404 with 13 steals in High-A) and second baseman Taylor Lindsey (.238/.306/.372 in the PCL. Lindsey’s stock is down somewhat as scouts expected he was capable of better but he has a draft pedigree as a former first-rounder and will get more chances.

The system needs more impact bats and the rash of pitching injuries shows how quickly mound depth can evaporate. Overall it currently looks like an average system.