Around the PCL: Buckner, Humber and Clash of Clans

Bill Buckner made an appearance at a game between the Fresno Grizzlies and Reno Aces recently. Philip Humber is still trying to find his way after his perfect game in 2012. And Ed Lucas is fed up with Clash of Clans.

Share All sharing options for: Around the PCL: Buckner, Humber and Clash of Clans

As you probably know by now, I'm often on the lookout for comical or interesting (at least to me) stories from the Pacific Coast League. Here are three I ran into recently:

Bill Bucker made an appearance recently at a game between the Fresno Grizzles and Reno Aces. He signed autographs for hundreds of fans and spoke after the game on behalf of the Fellowship of Christian Athletes about how his faith got him through the tough times of his career - which obviously included the error he committed in the 1986 World Series.

For the record, I interviewed Bucker for the FCA's magazine in 2001 and I didn't ask him about the error, which makes me wonder if I'm the only journalist post-1986 to do so.

The Sacramento Bee interviewed Sacramento River Cats pitcher Philip Humber recently about the perfect game he threw in 2012 for the White Sox. Humber has had an up and down career, prompting him to say this in the story about being released by the Astros after the 2013 season, "Well, I finally felt it was rock bottom. I went from doing well in 2011 (9-9, 3.75 ERA in 163 innings) to throwing a perfect game in 2012 and then in 2013 I found myself back in the minor leagues. You don't know if you're ever going to get back."

On a completely unrelated note, and don't ask me why I remember this because I have no idea, but when I attended the auction at Rosenblatt Stadium after it was closed, a pair of Humber's shoes was one of the offerings. He must have left them behind during his days with the Omaha Royals. I don't know if anybody bought them, but I did snap a picture. 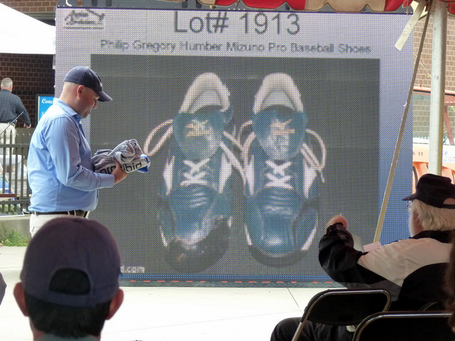 Apparently, New Orleans Zephyrs IF/OF Ed Lucas has reached his limit with teammates who are engrossed in the Clash of Clans game because it prompted this tweet from him, followed by a comical follow up about what a clan might look like if he were in control of such things.

Can you all please just call a truce from the clashing and give me my teammates back? #coc

If I had a clan, they would lead a peaceful, idyllic life and hand out orange slices to other clans after especially humid clashes. #coc