2) Travis D’Arnaud, C, Grade B+: Borderline A-. I expect he’ll be a solid major league starting catcher with power and good defense, although batting average/OBP may be erratic. Hitting .229/.292/.397 in 340 PA in the majors, wRC+93, fWAR 0.9. Has scuffled at times but the power is here and I think the other numbers will improve as long as he remains healthy.

Here's how the Mets prospect list was analyzed pre-season.

8) Amed Rosario, SS, Grade B-: .282/.331/.367 in 268 PA in the New York-Penn League, wRC+107. Just 18 years old, reports are positive at this point, still learning to tap his strength and control the strike zone, also needs defensive polish, all issues to be expected given youth.

10) Cesar Puello, OF, Grade B-: Hitting .237/.345/.362 in 356 PA in Triple-A, wRC+89. That’s terrible for Las Vegas and the PCL. Enigmatic prospect, tools are still here but performance record is all over the map and the fact that he hasn’t hit well since returning from PED suspension fuels understandable skepticism. 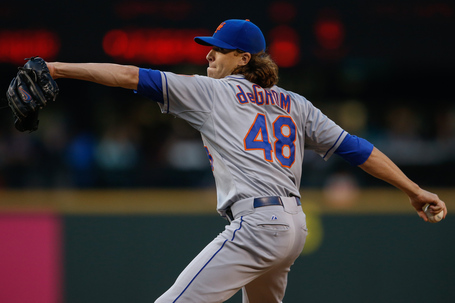 Not a great season for the major league team at 62-71, but there is good news where young talent is concerned. D’Arnaud hasn’t hit for average and is erratic defensively but the power is there. If he stumbles, Plawecki will be ready for a shot next year. DeGrom has been excellent, and Syndergaard and Montero provide more youth pitching options for 2015. Jeurys Familia has adapted well to relief, with Vic Black and Jenrry Mejia providing young, lively arms. There are several potential young closers and southpaw strikeout artist Jack Leathersich will also get a trial soon.

Brandon Nimmo is developing quickly. Dominic Smith’s lack of power is disturbing, but the booming bat of 2014 first-rounder Michael Conforto from the 2014 draft has adapted quickly to pro ball. Herrera, Rosario, and Cecchini provide up-the-middle depth that any team would want. Infielder Matthew Reynolds, drafted in the second round in 2012, is hitting .346/.409/.459 between Double-A and Triple-A, which will push his name up the lists for 2015.

Unavoidable injury attrition has struck some young arms, but more are on the way with New York-Penn League star Marcos Molina (1.56 ERA, 81/17 K/BB in 69 innings, 41 hits) notably throwing bullets for Brooklyn. Lefty Blake Taylor, acquired from the Pirates in the Ike David deal, has more potential in his arm than his 5.16 ERA and 20/22 K/BB in 30 innings in the Appy League indicate. I’m a big fan of Steven Matz at this point, who has fought his way back from missing two seasons to injury.