We continue today with reviewing our pre-season prospect lists, turning our attention to the Atlanta Braves. Remember:

This is a review of the pre-season list. It is not a new list! These are pre-season grades!

1) Lucas Sims, RHP, Grade B+. Borderline A-. Not a great year: 4.24 ERA, 4.52 FIP in 146 innings in High-A, 102/50 K/BB. This isn’t terrible but it isn’t nearly as good as anticipated, with a notably sharp drop in his strikeout rate standing out. Digging into the scouting reports on this one will be very interesting.

5) Mauricio Cabrera, RHP, Grade B-: 4.50 ERA in 28 innings in High-A, 3.80 FIP, 26/16 K/BB. Missed much of season with forearm strain, control erratic as well. Sample too small to indicate much at this point, but reports haven’t changed: quality stuff but still raw.

9) Joey Terdoslavich, OF-1B, Grade C+: Borderline B-. Trapped in Triple-A, hitting.258/.341/.391 in 542 PA, 15 homers. Over the years I have noticed that when a guy hits well in Triple-A, as Terdoslavich did last year, but doesn’t get a major league job, he often slumps in his second go around the level. Needs a change of scenery most likely.

10) Victor Caratini, 3B-C, Grade C+: Borderline B-. Traded to Cubs in James Russell/Emilio Bonifacio trade, hit .279/.352/.406 in 365 PA in Low-A before the trade. Solid hitter with good plate discipline, hasn’t developed power yet but that may come in time. 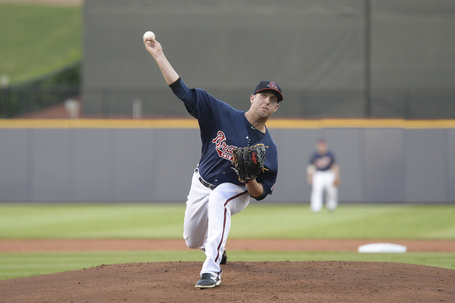 18) Shae Simmons, RHP, Grade C: Looked good in major league action, 2.91 ERA, 3.14 FIP in 22 innings with 23/11 K/BB. Currently on rehab assignment with shoulder soreness. No question he can be an effective reliever if healthy. 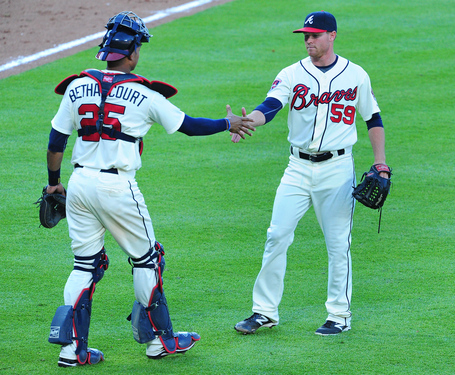 19) Ian Thomas, LHP, Grade C: Older lefty posted 4.22 ERA with 13.6 K/BB in 10 big league innings, has pitched at three minor league levels since going back to minors in late May. Seems like he can be a plausibly effective short man although platoon split was reversed in the majors (.321 wOBA vs lefties, .226 vs. right-handers).

The main rookie contributors at the major league level have been La Stella and Hale, neither outstanding but both certainly useful, with La Stella pushing Dan Uggla off the cliff. Simmons also performed well during his trial and lefty Chasen Shreve looks like a nice asset going forward. Bethancourt will have a long career due to his glove but I still doubt that he’ll hit enough to start regularly, although I could be wrong.

New additions to the list would include 2014 draftees Braxton Davidson (a power/patience hitter that the system needs badly) and second round RHP Garrett Fulencheck (big Texan who fits Braves pitching mold). Third baseman Kyle Kubitza looked stagnant pre-season but is hitting .295/.403/.466 in Double-A and would move back onto this list. Hard-throwing Juan Jaime is an older prospect at age 27 but has emerged in the bullpen. Another system farmhand, infielder Phil Gosselin, is suddenly hitting (.344 in Triple-A, .304 in the majors) after several years of doing little.

Another arm to watch is Alec Grosser, who is having a decent year in the Appalachian League. Right-hander Williams Perez has a notably high strikeout rate in Double-A. Infielder Elmer Reyes has made some progress with the bat and could slot as a utility type.