As an evaluator who often chases high profile pitching prospects, it was a bit odd for me to scout a game featuring none of the sort. There was one former top pitching prospect in Reading starter Adam Loewen, but that was quite a long time ago and he has had an unusual career since then. Loewen was the fourth overall pick in the 2002 draft by the Orioles, made it to the Majors with the O’s but then injuries forced him to take a Rick Ankiel type of career switch by transitioning to an outfielder and first baseman. He made it to the Major Leagues with the Blue Jays in 2011, but was unable to establish himself at the highest level as a hitter. This prompted another career switch from Loewen, who signed at minor league contract with the Phillies prior to the 2014 season as a pitcher. He has stayed healthy this year but possesses fringe stuff and below average command. Loewen could factor into the wide-open Phillies rotation next season, but I can’t see him being any more than a replacement level pitcher. He did have a nice outing Friday night, however, surrendering just three rather weak hits and striking out eight, but he also walked four and lost control at times. It’s great to see a guy continue to chase his dream but Loewen is a far cry from the prospect he used to be.

On the Erie side, I hadn’t heard much about starter Warwick Saupold heading into the matchup and didn’t plan on writing about him, but his impressive outing prompted a report. A righty with an average 6’1", 195 pound frame, Saupold sat 89-92 with his fastball, showing good movement, control, and aggression in the zone with the pitch. His best offering was a sharp overhand curveball with 11-5 movement that generated a lot of swings and misses. He showed the ability to move the pitch around, throwing it for strikes and as a chase pitch in the dirt, and I was impressed at how the offering did not lose its shape when he threw it in the zone.

Saupold’s third offering was a changeup that was solid-average and generated a few swings and misses. It was not used as often as the fastball or the curve, but the offering featured similar arm side run to the fastball and was thrown with good arm speed and conviction, adding to the deception. Although it is tempting to throw him into the "just another righty pitcher at Double-A" category, last night’s look showed me that he could be more than that. He demonstrated a plus curveball and two other average pitches, a good feel for his craft and even plus #want when he induced a critical inning ending double play in the seventh to preserve the lead.

Based on this look, I grade Saupold as follows (present grade/future grade): Fastball 45/45; Curveball 60/60; Changeup 45/50; Command 55. That might not be enough to establish himself as a legitimate big league starting pitcher, but he is definitely more than an organizational guy.

Altherr is a tall, thin, toolsy outfielder with a questionable hit tool. He starts in an open stance with his hands high, then steps to closed and shows a long swing with a lot of preswing movement. He had trouble repeating the excessive movement, leading to questions about his bat to ball ability. If he can make enough contact his power could play, as he is a strong kid with a good frame who can add muscle as he grows.

Neither his defense in right nor his arm was tested, but Altherr did get a chance to show off his speed. He has long legs and a top speed slightly above average, but didn’t make good decisions on the basepaths. He was thrown out easily at home trying to score on a groundball to first then got a bad jump on a steal attempt and was thrown out again. With some refinement it could be a weapon but his baserunning is still a work in progress.

Altherr is an interesting player to watch, but players with questionable hit tools are typically longshots to reach their potential. The big German-born outfielder fits this bill and I don’t ever see him hitting enough to establish himself as a Major League regular. However, he could carve out a role as a reserve with a low average and flashes of talent.

Scouting the PG and UA All American Games

Listed at 5’9", 195 pounds, SeaWolves second baseman Devon Travis will earn Jose Altuve comparisons both for his height and hit tool. Short in stature, Travis has a think lower half and lacks physical projections, but the quality of the hit tool erases many concerns about his size. He has a quick trigger on his short, compact stroke, good batspeed and natural bat to ball ability. I loved the selective aggression he showed during his plate appearances, as he was comfortable wasting pitchers’ pitches and waiting for his pitch, which he was eager to jump on whenever it came. He didn’t have great results in this game, but I was impressed with his ability to barrel a ball after getting fooled on an offspeed pitch. This is an easy plus tool and this player will hit at the Major League level.

Players his size do not often offer any power, but Travis has surprising pop for his frame. He doesn’t sell out for it, but with his plus batspeed he should be able to knock a few out each year. He won’t hit 20, but 8-12 is a reasonable expectation in this category.

Defensively, Travis was solid in his limited chances. On his one difficult play, he got a bad read on a chopper but made up for it with a nice pick and a strong throw. The arm certainly plays at second but it was unclear whether it would play at third. Travis isn’t a shortstop but the ability to play the hot corner could help him earn more playing time with the Major League club. He also demonstrated plus speed, although he doesn’t figure to be a true basestealer.

Travis is a bat first infield prospect whose bat will carry him to the Major Leagues. I didn’t see enough of his defense to offer firm grades on those tools, but even an average defender with a plus hit tool and occasional pop could be a solid regular. Based on this look, I’d give Travis the following grades on the tools he displayed last night: Hit: 55/60; Power: 35/40; Speed: 60/55 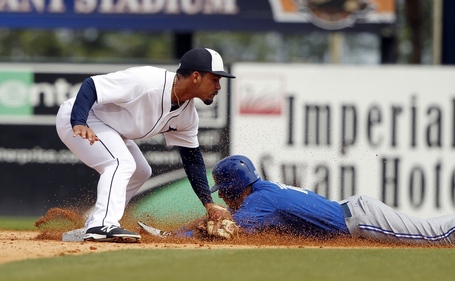 Devon Travis applies a tag in spring training, via cdn3.vox-cdn.com

Erie shortstop Dixon Machado also showed signs of a Major League future, including a terrific baseball name that is as smooth as his actions on the field. Machado is 6’1", 170 pounds and thin, but also well built for his frame and position.

At the plate, the Venezuelan displayed a short, line drive oriented stroke that is still a work in progress. I liked the swing itself and his very good plate discipline, but Machado could use a bit more consistency and work with his bat to ball skills. One concern is that he threw away an at bat late in the game, swinging out of his shoes three times on a strikeout, which is not his best approach. He is best when he stays short to the ball and sprays line drives around the yard, and if he focuses on that, I think the hit tool will play at the Major League level.

A line drive hitter, Machado’s swing isn’t geared towards knocking balls out of the park. His offensive skill set is best when he doesn’t attempt to do so, thus it is no surprise that his power grades out well below average. Defensively, Machado can make an impact. He showed smooth actions in the field, very good footwork, and a strong throwing arm. He is a true shortstop who can stay at the position long-term and provide value for his club. Machado also possesses plus speed and good baserunning instincts. I’m a bit surprised at his low stolen base totals over the past few seasons (five this year, one last year, but a combined 48 in the two years prior), but even if he doesn’t turn into a stolen base threat his speed is an asset.

The last player of note was Erie rightfielder Steven Moya. At a chisled 6’6", 230, Moya is a high-waisted physical specimen who looks the part of a Major Leaguer. At the plate, however, he does not, as the big left handed hitter lacks both balance and consistency with his swing. Moya starts closed, has significant preswing movement with his hands and has trouble getting repeating said movements. His stroke is short for a big power hitter, but it doesn’t make much of a difference since his pitch recognition and bat to ball skills are poor and he can be beaten in many different ways. I have no idea how he is hitting .273 at Double-A and I don’t expect him to hit anywhere close to that in the Majors. This is a well below average tool that will be exposed at the highest level.

Moya’s power is a different story. The Eastern League home run leader with 33, if the big fella can hit enough he could easily match that total in the Major Leagues. He has terrific batspeed and the ball jumps off his bat when he makes contact. In one of his plate appearances, Moya was fooled and skied a pop up straight in the air to right that made it all the way to the warning track, demonstrating that even if he doesn’t square up the ball, Moya still possesses enough raw power to hit home runs.

Neither his defense nor his arm was tested in this look, but Moya did show off solid average speed. Despite his long legs, he has short strides and will slow down as he develops, but for now the tool plays.

Moya is an interesting player, but the lack of a quality hit tool will hold him back. The story begins and ends with this tool, and really any semblance of it would allow him to become a legitimate power threat at the highest level. However, that outcome is far away and Moya has far too many obstacles to overcome to get there. Based on this look, I’d give him the following grades on the tools he displayed last night: Hit: 25/30; Power: 70/70; Speed: 50/45

All statistics courtesy of MiLB.com.

Dan Weigel is a contributing writer at Minor League Ball and Beyond the Box Score. You can follow him on Twitter at @DanWiggles38.