1) Byron Buxton, OF, Grade A: Limited to 30 games at High-A due to a wrist injury, hit .240/.313/.405, wRC+106. Promoted to Double-A and suffered a concussion in his first game, shutting him down the rest of the year. Lost season but still an outstanding prospect, assuming his body cooperates.

2) Miguel Sano, 3B, Grade A: Blew out his elbow in spring training, requiring Tommy John surgery. On hold until we see how he recovers.

3) Kohl Stewart, RHP, Grade B+: 2.59 ERA in 87 innings in Low-A, 3.73 FIP, 62/24 K/BB, 75 hits allowed. I’d like to see more strikeouts but in-person reports were positive. Has been bothered by shoulder trouble in recent weeks. Stock will depend on injury assessments.

5) Eddie Rosario, 2B, Grade B: Hitting .242/.286/.396 in 283 at-bats in Double-A, 86 wRC+. Very disappointing season, not hitting up to his previous standards and having off-field troubles as well including a recent benching. Will have to study this one very closely at the end of the season to determine what’s gone wrong.

6) Jose Berrios, RHP, Grade B: 1.96 ERA in 96 innings in High-A, then 3.72 ERA in 29 innings in Double-A, 129/32 combined K/BB with 99 hits. Reports excellent, statistics quite good, only problem is a minor shoulder issue which appears to be resolved. Stock up and it was already rather high.

How did the Twins prospect list look before the 2014 season?

10) Max Kepler, OF-1B, Grade B-: Hitting .257/.334/.379, wRC+106 in 361 PA in High-A. Although he continues to produce slightly above average numbers, I think his stock is slipping; he hasn’t blossomed for power and his defensive value is nothing special. He’s 21 now, so age-relative-to-league is mattering less.

15) Danny Santana, SS-OF, Grade C+: Hitting .313/.349/.460 in 283 major league PA, wRC+127, 12 steals. Remarkably good rookie season with no signs of slowing down, mixture of defensive versatility, speed, athleticism, and line drive hitting blossomed sooner than expected. I don’t think it is a total fluke, either, he should remain valuable. 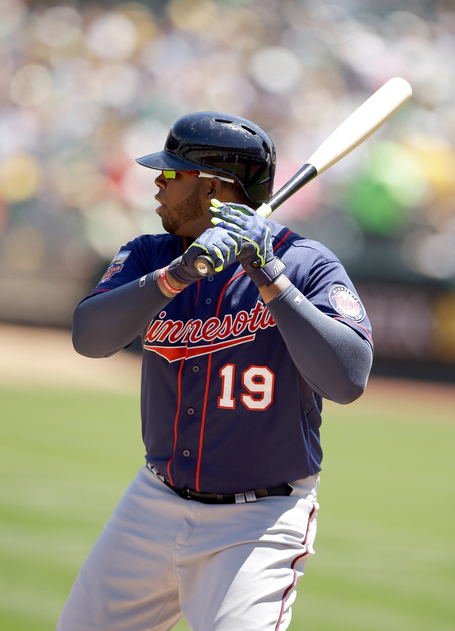 18) Zack Jones, RHP, Grade C+: Hard-thrower limited to just seven innings this year in A-ball due to an aneurysm. Has recovered and is back on the mound.

Very much a bad news/good news situation for the Twins this year.

The negatives are obvious, injuries striking down the class of the system in Buxton and Sano. Stewart’s current shoulder trouble is also worrisome; it is not supposed to be a big deal but any time shoulder trouble gets involved, fretting is inevitable, especially when there is a concurrent decline in velocity.

On the positive side, the sudden emergence of Danny Santana is a big bright spot. I also think Kennys Vargas is a legitimate hitter and both players are symbolic of recent strides the Twins have made in Latin American scouting. Trevor May and Alex Meyer should be ready to contribute their fastballs to the major league staff in 2015. Jose Berrios has emerged as an excellent prospect, and Lewis Thrope should be viewed as a breakthrough candidate for next season.