The Los Angeles Dodgers and the Chicago Cubs completed the Darwin Barney trade this afternoon, with the Dodgers sending Low-A pitcher Jonathan Martinez eastward to finish the transaction. Here's the scoop on the latest addition of pitching depth to the Cubs system. 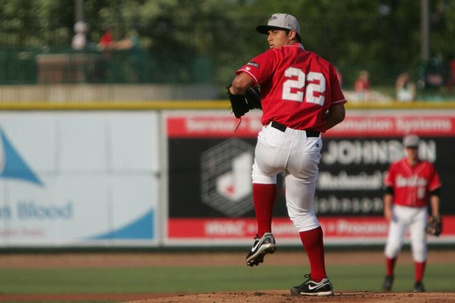 Martinez is a 6-1, 205 pound right-hander born June 27, 1994. Although just 20 years old, he doesn't have classic physical projection with his frame and may not gain much additional velocity. His fastball is decent at 90-94 MPH and Midwest League observers report that he's made good progress refining his slider and change-up this year, resulting in a higher strikeout rate compared to last season. His control has been solid thus far, and if that remains true at higher levels he could be a number four/five starter or a good bullpen option eventually.

ANALYSIS: He's not a Grade A prospect but Martinez is young, has a decent arm and a reasonably good track record. I think he's a fair return for someone like Barney.