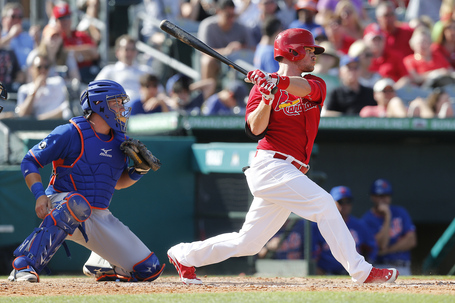 Ramsey is a 6-0, 190 pound left-handed hitter and right-handed thrower, born December 19, 1989. Long a favorite of scouts for his hard-nosed style of play, Ramsey has average tools across the board and his work ethic is his most conspicuous strength. He has a decent eye and a consistent line drive swing. Scouts expect him to hit for average, which made his .253 mark last year in Double-A somewhat unexpected. He has a sharp platoon split, posting a .988 OPS against right-handers but just .728 against lefties this year.

He'll flash above-average power but his average running speed hasn't translated into large numbers of steals in pro ball despite success as a baserunner in college. On the other hand, he has excellent defensive instincts and is capable of playing all three outfield positions, running quality routes in center field and making accurate throws at all three spots.

Analysis: Ramsey's bat is a bit short to start regularly at an outfield corner but he should be a productive platoon player and should have a long career as a fourth outfielder who can handle center field. I think he's a legitimate haul for a 29-year-old pitcher with a 5.51 ERA.