Here’s an updated mid-season prospect list. The list at the beginning of the season went to 150, but 75 will do for mid-season. I could tinker with this list indefinitely, but at some point you have to publish.

As with any prospect list, I try to find a balance between long-term upside, short-term potential, physical tools, and current skills. Mixing hitters and pitchers on the same list is also philosophically problematic but unavoidable it seems. Compared to other lists, I weight proximity to the majors a little more strongly than some analysts. I also try to avoid wild swings in placement from list to list.

You can ask about your favorite non-listed player in the comments section if you like and I'll give you an approximate ranking. The list does NOT Include 2014 draftees and new international signees, nor does it include players who have exceeded rookie limits or are a good risk to do so. Here are the guys who graduated, including their previous ranking: 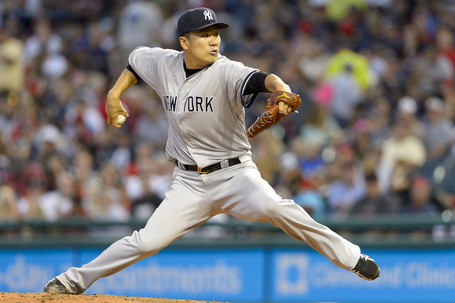 Obviously the comments here are just tiny snippets and not a full-blown analysis but I will be here all day to answer questions in the discussion.

2) Carlos Correa, SS, Houston Astros. (Previously ranked 13th): I’m not especially worried about the leg but with Bryant closer to the majors I will put Correa here.

3) Byron Buxton, OF, Minnesota Twins (2): Lost season thus far due to wrist injury. No change in status on his own terms, I just think Bryant and Correa have moved a little ahead.

4) Oscar Taveras, OF, St. Louis Cardinals (4): No change in status for me and expected to graduate off the list soon.

6) Joey Gallo, 3B, Texas Rangers (76): Huge leap forward and you can make a case as high as three. The extreme strikeout rate combined with extreme power still makes him an unusual talent. 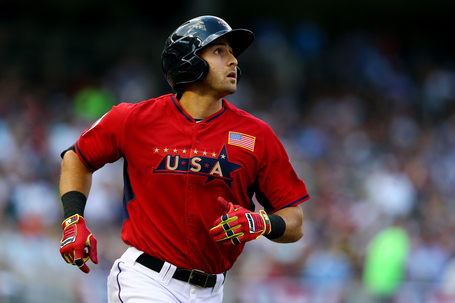 7) Francisco Lindor, SS, Cleveland Indians (11). No real change in status for me. I believe he’ll show more power in time.

8) Taijuan Walker, RHP, Seattle Mariners (23): Proximity to majors, stuff, command, and performance slot him here for me. Others may disagree. 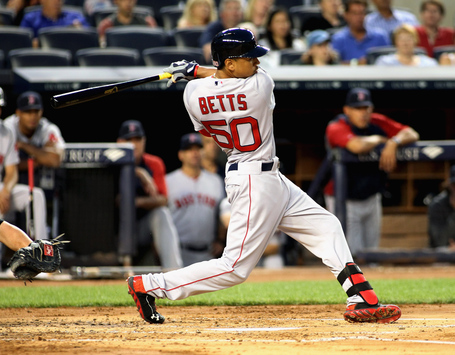 Photo by A. Marlin, Getty Images

11) Andrew Heaney, LHP, Miami Marlins (20): Is it just me or does he still not receive as much attention as he deserves?

12) Lucas Giolito, RHP, Washington Nationals (25): Moving up steadily as he proves his health. 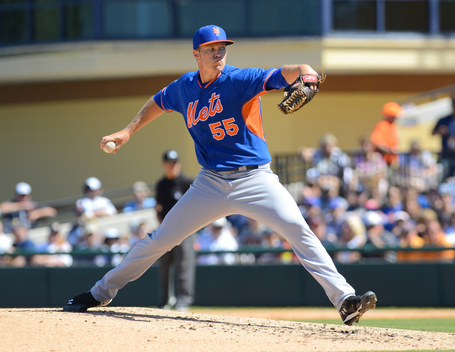 15) Javier Baez, SS, Chicago Cubs (10): Weaknesses are obvious, as are his strengths. I have some concerns but not enough to knock him down further than this, yet.

19) Corey Seager, SS, Los Angeles Dodgers (39): Advancing steadily and not a creation of the California League.

21) Julio Urias, LHP, Los Angeles Dodgers (41): He wouldn’t even be draft-eligible until next year. 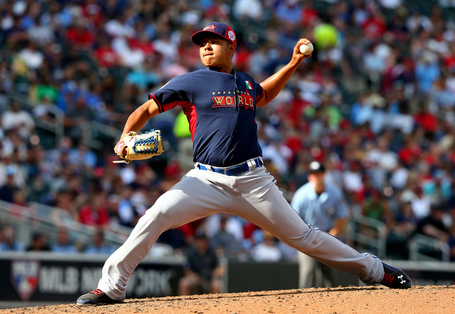 22) Aaron Sanchez, RHP, Toronto Blue Jays (29): I still have worries about his command but he’s held his own well enough to maintain a spot in the 20s.

23) Blake Swihart, C, Boston Red Sox (81): Bat has come around and his defense is excellent.

24) Jorge Soler, OF, Chicago Cubs (62): Small sample due to injury but murdering the ball.

26) Tyler Glasnow, RHP, Pittsburgh Pirates (54): Like Meyer, outstanding stuff with some command issues but stock is up overall.

28) J.P. Crawford, SS, Philadelphia Phillies (60): I love the reports on his defense and I think the bat will improve.

29) Joc Pederson, OF, Los Angeles Dodgers (40): I don’t think he has much left to prove in the minor leagues.

30) James Paxton, LHP, Seattle Mariners (24): Tough ranking due to lat injury but at least it wasn’t his shoulder or elbow. I think his skills are genuine and thus he stays high. 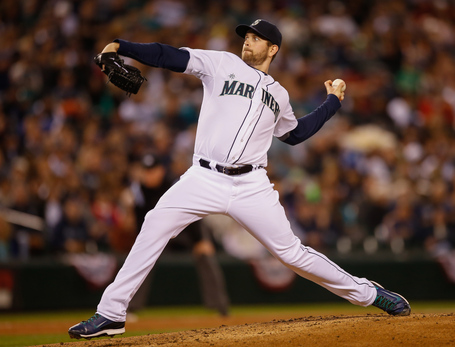 31) Kyle Crick, RHP, San Francisco Giants (36): Yeah, still has command issues but I am going to stick with this one for awhile.

32) Jesse Winker, OF, Cincinnati Reds (43): I’m confident that he’ll get the bat going in Double-A soon.

33) David Dahl, OF, Colorado Rockies (66): Better tools than Winker and strong across-the-board skills, but I’d like to see him outside the Sally League. Stock up though.

34) Arismendy Alcantara, INF, Chicago Cubs (87): Reports out of the PCL were very positive, the numbers were excellent, and he looks great in the majors so far. 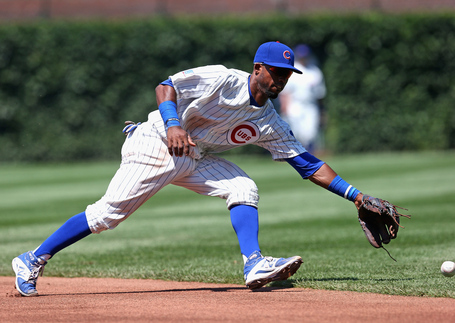 35) Daniel Norris, LHP, Toronto Blue Jays (98): Has made huge progress refining his mechanics and command, and he always had the stuff.

38) Luis Severino, RHP, Yankees (not ranked): I had him as a Grade B- pre-season, commenting "he could leap up the prospect lists this year so keep a close eye on him." He’s done that. 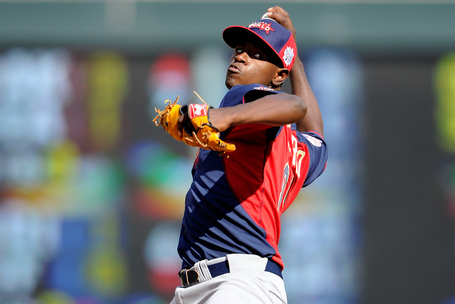 40) D.J. Peterson, 3B, Seattle Mariners (75): He’s not Kris Bryant or Joey Gallo. But he’s also not a creation of the California League.

41) Ryan McMahon, 3B, Colorado Rockies (68): It is wise to be cautious about Asheville "breakouts" but he’s showing the same power on the road as at home.

42) Michael Taylor, OF, Washington Nationals (NR): Rated Grade B- pre-season, with a recommendation that he be watched closely. Always had the tools and skills have developed.

43) Maikel Franco, 3B, Philadelphia Phillies (35): Hit poorly in April and June, hit well in May and so far in July. Stock is down but based on entire track record I don’t want to drop him past this slot yet.

44) Eddie Butler, RHP, Colorado Rockies (19): Declines in both strikeout and ground ball rates are worrisome, but let’s see how he comes back from injury.

47) Braden Shipley, RHP, Arizona Diamondbacks (55): Scouting reports are more impressive than the numbers, moving his stock up a little.

48) Lance McCullers, Jr, RHP, Houston Astros (48): Up and down season results in no ranking change at his point. Has pitched better in Lancaster than on the road.

49) Kohl Stewart, RHP, Minnesota Twins (64): Has performed well enough in the Midwest League to move up a bit. 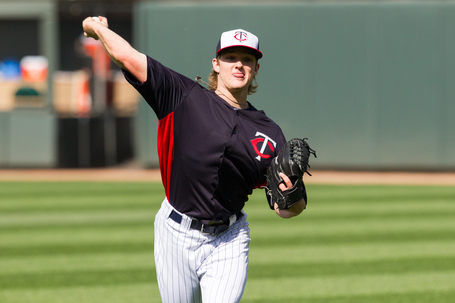 50) Clint Frazier, OF, Cleveland Indians (49): On fire recently after making change to his swing mechanics.

51) Austin Meadows, OF, Pittsburgh Pirates (50): Just getting to play now after being injured all spring.

54) Andrew Susac, C, San Francisco Giants (83): I don’t know why he doesn’t get more attention. He can hit and has made steady progress on defense.

55) Domingo Santana, OF, Astros (NR): Grade B pre-season but just off the 150 list. Couldn’t make contact in the majors, it will be interesting to see if he works on that now that he’s back in the minors. Enormous power and still young for the level.

56) Raul Mondesi, SS, Kansas City Royals (61): Not having a good year with the bat, but five years younger than his competition.

57) Albert Almora, OF, Chicago Cubs (32): Needs to show more in the second half or list slippage will continue. 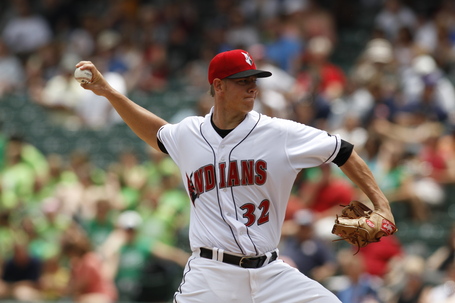 59) Stephen Piscotty, OF, St. Louis Cardinals (70): I’d like to see more homers but I think they will come eventually.

60) Kevin Plawecki, C, Mets (NR): Grade B pre-season and almost made the list then.

61) Brandon Nimmo, OF, New York Mets (109): Slow start in Double-A but he’s maintained command of the strike zone and I think he’ll come around.

62) Nick Williams, OF, Rangers (NR): High-ceiling Grade B- pre-season, has improved his approach from horrible to below average and we’ll have to see how the BA/OBP hold at higher levels, but huge upside.

63) Dalton Pompey, OF, Blue Jays (NR): Grade C pre-season though I respected his tools, speed, and defense. I wasn’t sure about the bat but he’s shown a lot more this season.

64) Colin Moran, 3B, Miami Marlins (67): Holding steady. Showing the expected strengths but still has the questions about power.

65) Rob Kaminsky, LHP, St. Louis Cardinals (NR): Was a B- pre-season as we waited to see how things looked in pro ball. They look great, reports from Midwest League very positive.

66) Marco Gonzales, LHP, St. Louis Cardinals (116): Reached the majors one year out of college. Ceiling not as high as Kaminsky but he’s closer. 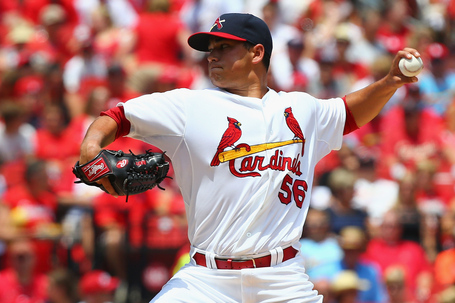 70) Mike Foltynewicz, RHP, Houston Astros (58): Still dominates when his command is on. May wind up in bullpen.

71) Alexander Guerrero, 2B, Los Angeles Dodgers (108): Hard to know how to slot an older guy like this but hitting skills seem legitimate to me even accounting for Albuquerque/PCL.

74) Christian Walker, 1B, Baltimore Orioles (NR): I think the power boost is real.

75) Jorge Alfaro, C, Texas Rangers (84): Not much change, still draws raves for throwing arm and overall tools, still hasn’t put his game together completely. I want to see more progress in second half. 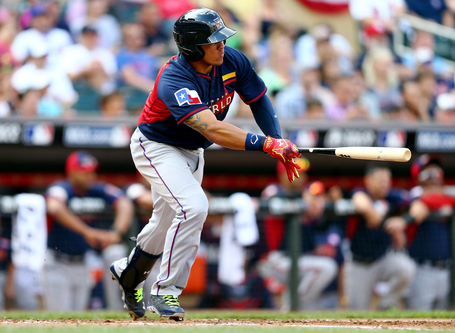 Next Up In MLB