Check out what George Springer did. Seriously, it worth the click.

Hey everybody, its Gameday time. Four games were rained out but there was more than enough action around the league anyway. Four clubs faced off against a squad comprised of their own minor league system, and all but one big league team won (the Braves).

As far as individual performances, it all starts with George Springer of the Astros. He made five plate appearances and reached base in each one against Texas. The day included a pair of free passes, two singles, and a lonnnng solo home run to dead center at the Alamodome. He got extended on a fastball on the outer half and hit it a good 430 feet. MLB.com has the goods. He scored three times and drove in two in the process, and he stole his fifth bag of the spring.

Blue Jays right handed pitcher Aaron Sanchez did not allow a run all spring, adding two more scoreless frames to his total to make it 15.2 innings. He struck out three yesterday and did not allow a single base runner. This spring, Sanchez struck out 11 to six walks, allowed 10 hits, hit one batter and generated 3.8 ground outs for each air out.

Mike Foltynewicz of the Astros also had a scoreless appearance, working 2.2 innings. He struck out two, and allowed a hit and a walk. Lucas Sims faced off against the big league Braves and was shaky, but solid. He uncorked a wild pitch and hit a batter (Evan Gattis of all people) in two innings with a strike out, an unearned run allowed, and one hit. Yordano Ventura did not fare as well for KC, giving up three runs in three innings. He allowed four hits and two walks with five strike outs and two wild pitches against Milwaukee.

A number of teams had multiple minor leaguers have solid days at the plate. The Braves, Orioles, Rays and Reds each squared off against teams comprised of their own farm systems, while the Astros faced off against the Veracruz Rojos of the Mexican League. Seven minor leaguers left the yard, and a number of pitchers were knocked around. Check them out below along with all the roster moves and injury updates from Saturday.

OF Matt Tuiasosopo (Outright to AAA)

George Springer was a midget among dwarves on the baseball field yesterday. Homers, stolen bases, walk, singles, he had it all, and THAT will get you the nod for Player of the Day. 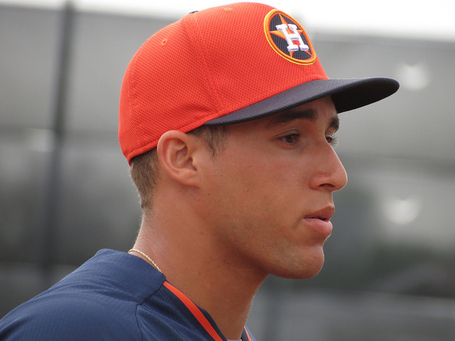