All the roster moves, injury updates and stats from the day that was, including Tanaka's 10 K gem.

Hello everyone and welcome back to the Gameday thread. Big news broke yesterday in regards to the Joint Drug Agreement (JDA). First time offenders are now going to be suspended for 80 games as opposed to 50 under the previous agreement. A second positive test will now be a full season suspension, without any pay, instead of the previous 100 games. They will also not be able to partake in the postseason if their team is lucky enough to reach it, and that also goes for a first offense even if the player has already served the suspension. A third offense will still result in a lifetime ban. One small point that Jeff Sullivan over at FanGraphs singled out, the agreement includes a section that allows the arbitration panel for the hearing to reduce the punishment if the player proves the substance was not intended to enhance performance. There will also be more urine and blood testing, along with state-of-the-art carbon isotope testing. I have no clue what that is but it sounds legit, and pretty in-depth. Jeff Todd's explanation at MLBTR also notes, "any player who has a suspension upheld will be subject to six additional random, unannounced urine tests and three blood tests for every year in the remainder of his career."

Oh yeah, that fishy dude out in Los Angeles got $144.5 million bucks for six years, starting in 2015. More on this when more details emerge, with the only other thing released is that it contains a full no-trade clause.

Now lets get back to the game action from Friday. My computer is about to die and I'm not near an outlet, so you'll have to peruse the box scores below to find how your favorite team's top prospects performed. Also, don't forget about the comprehensive roster coverage at the end.

No real competition here. A double-digit strike out game will always put you in consideration, but doing that in spring training is downright impressive. Cheers to you Mr. Tanaka. 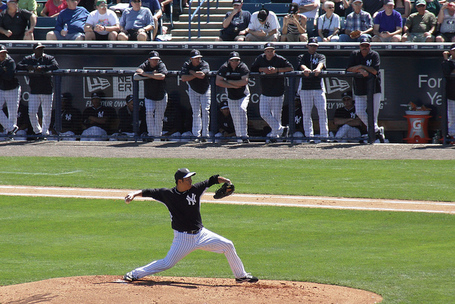