Injury news, roster moves, and as always, your daily stop for the Top Prospect's stats.

Hello everybody,welcome back to the Gameday thread. With a number of split squad games yesterday, many teams called on the help of some minor leaguers to finish out their rosters.

Lets start at the top and work our way down. XB, Xander Bogaerts, smacked a pair of singles with a strike out and a run scored yesterday for the Bo Sox. Javier Baez swiped his second bag of the spring, also striking out twice and making his second and third errors, one of each of the throwing and fielding varieties. The man playing next to him on defense, third baseman Kris Bryant, had a rough go of it Tuesday, coming up one whiff shy of the golden sombrero. Nick Castellanos popped another pair of doubles for Detriot, giving him nine so far. Jose Abreu went 0-4 with a strike out, Albert Almora drove one run in during his only at bat, and Travis d'Arnaud smashed a solo home run for the Mets. The Speedy Hambino, aka Billy Hamilton, drove in two with a pair of sacrifice flies and also struck out. Jackie Bradley came up four times and sat back down each time, also running up a pair of strike outs. Kolten Wong of the Cardinals kept the scorekeeper busy, going 2-3 with a run scored, RBI, walk, strike out, was caught stealing and made an error while is teammate Stephen Piscotty came up with nothing in his only at bat. Marcus Semien walked and doubled in three trips to the dish, and finally, Angels second sacker Taylor Lindsey, who went 0-3 against the Cubs split squad.

The Stringbean Slinger from South Carolina got his first big league spring start yesterday, leading one of the Cubbies split squads to a 5-5 tie. CJ Edwards threw 2.2 innings versus San Diego, allowing three runs on four hits and three walks. He struck out only one batter on the day. Newly minted Rays' fifth starter Jake Odorizzi had a chance to fine tune some things against division rival Boston. He went five strong, also allowing three runs and four hits but only two walks, and he struck out five. He also gave up a long ball to Will Middlebrooks.

Outside the realm of the Top 100, other lesser-known prospects still got some dirt on their uniforms. Both Ehire Adrianza, the short stop of the Giants, and Stefen Romero of the Mariners notched three hit games, with Adrianza hitting three singles with a run scored. Romero packed a bit more punch though, hitting his fourth bomb of the spring in addition to a pair of singles and three runs batted in. A trio of third base prospects racked up the RBI's in limited action with the Braves' Kyle Kubitza knocking in two on a double, Pittsburgh's Walker Gourley cleared the bases with three RBI on his double, and the Padres' Gabriel Quintana knocked in two with a double.

Kyle Gibson of the Twins had a solid performance, turning in three innings of shut out ball with just two hits allowed, one strike out and a wild pitch. Derek Law, Danny Webb, Zac Rosscup, and Carson Smith each threw perfect or nearly perfect innings for their respective teams as they all are fighting for a spot in the big leagues. Law allowed one hit for San Fran, Webb went three up, three down for the White Sox, Smith did the same for Seattle but struck out one, and Rosscup got four straight outs, two via the K.

As always, be sure to check the roster moves and injury updates to see if your favorite players are on the move or getting hurt (hint - there's new info on Buxton's ailing wrist).

Acquired a Player To Be Named Later (SD)

Big flies and three RBI's are an easy way to get your name here, congrats Stefen Romero. 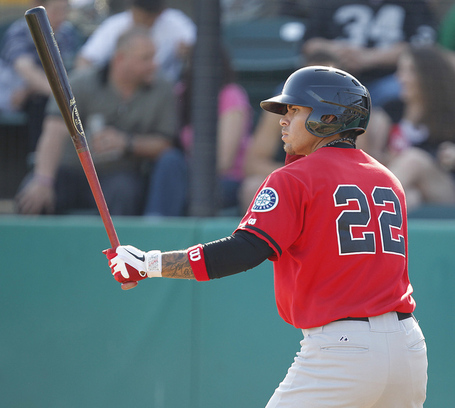