More roster moves, stats and injury news from around the league.

Welcome folks, it's time for the Gameday thread. We had three games washed out due to rain in Florida, but the other games were unaffected.

There were a few Top 100 players still hanging around big league camps, with Jake Marisnick of the Marlins and Marcus Semien from the White Sox both putting together multi-hit games. Marisnick doubled and singled as the Fish fell to the Nationals while Semien brought the thunder. He hit his first home run of the spring, driving in three with a single, strike out, and he was caught stealing. Stephen Piscotty and Travis d'Arnaud were the only other Top 100 players to reach base yesterday while facing off against each other, with d'Arnaud managing an RBI single and strike out for the Mets. Piscotty was hit by a pitch, knocked a single and scored once with an error for the Cards.

The White Sox also had the only pitcher from the Top 100 on the mound, right hander Erik Johnson. He threw six solid innings, allowing three runs on four hits and three walks for the "quality start". He also struck out four and let one get away and hit a batter.

Phillies catcher Cameron Rupp drove in a pair with a double, a walk, and a run scored. Angels infielder Grant Green had a pair of hits, driving in three with a double, single, and run scored. Billy Burns got on base but did not attempt a steal going 1-3 with a punch out. Tommy Medica of the Friars had himself a solid game, strengthening his chances of sticking with the big club come April. He was 1-4 with a two-run homer off veteran righty Carlos Villanueva.

Also be sure to check out the roster moves and a few new injuries that have been added to the list below.

Marcus Semien launched his first bomb and drove in three. 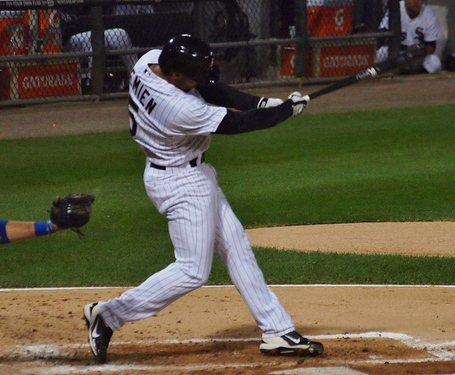