Welcome everyone! Its time for the Gameday thread. We've hit the homestretch of Spring Training 2014, and we are less than a week away from league-wide Opening Day. Lets take a look at the action from yesterday.

Michael Choice put together a solid three-hit game against the Padres, driving in three with a double and pair of singles in five at bats. Kolten Wong picked up another hit, singling once in three at bats with his second stolen base and a strike out for St. Louis. White Sox infielder Marcus Semien got the start against the Rockies, reaching base twice with a single and walk, to go with a strike out in five plate appearances. The only other Top 100 position player to get a hit was Red Sox short stop Xander Bogaerts. He singled and struck out in three at bats against Tampa.

Three Top 100 pitchers got on the mound with Kevin Gausman the most impressive. He struck out eight in four innings with one run allowed on a solo home run to Starling Marte, two other hits, two walks, and a wild pitch. Yordano Ventura also threw well as the Royals took on the Giants. He only allowed one run in five innings on five hits, three walks and he struck out three. He also hit a batter and picked Brandon Belt off first base. Matt Wisler also took the bump, struggling through 2.2 innings against the Rangers. He allowed five runs on five hits, two walks, and a wild pitch to go with two punch outs.

A handful of prospects showed off their power strokes, including a certain Cubs corner infielder battling to make the 25 man. Mike Olt blasted his fifth home run, but also made a pair of errors at the hot corner and struck out once in five at bats. Mariners right fielder Stefen Romero hit a pinch-hit, walk-off, three run jimmy jack to win it against Oakland. Jonathan Schoop of the Orioles knocked out his second home run, a solo shot, with an error as well at second base. A's center fielder and resident speedster Billy Burns was 2-4 with a strike out,

Though not a prospect, or even a rookie for that matter, Michael Pineda has been lights out for the Yankees after such a long absence from the game. Yesterday he went six strong, registering a quality start only giving up three runs (two earned). He did not issue a free pass, allowed six hits, struck out two, hit a man and uncorked a wild pitch. Brandon Workman came in for 3.2 innings of relief for the Red Sox against the Rays. He allowed one run to cross on three hits with no walks and three punch outs.

IF Kevin Frandsen (Outrighted to AAA)

Strike out eight in four innings, and you too, can be Player of the Day. 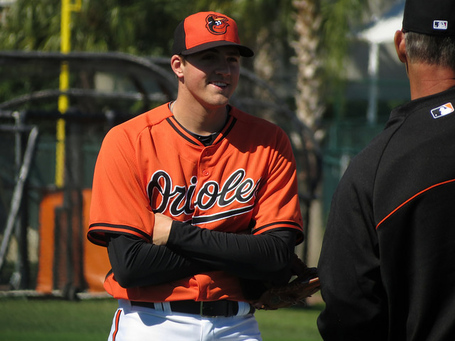