Stats from the Top 100 and beyond to go with the usual roster moves and injury updates.

Hey everyone! Baseball has begun! I do not care that it was only two games on the other side of the world, it's back! The Dodgers ended up taking both games, 3-1 in the first game, and 7-5 in the second. Chris Owings got the start at short stop in Game 1, going 0-3 with a walk and two strike outs, then a pinch hit single in Game 2. Not in the Top 100 but participating Down Under, Chris Withrow and Bo Schultz each threw an inning for the Dodgers and Diamondbacks, respectively. Withrow walked one and allowed a hit with no runs crossing while Schultz only gave up a single with no walks, runs, or punch outs. That single also came on the first pitch he threw in the Major Leagues.

A pair of Top 100 players left the building Saturday, with Travis d'Arnaud of the Mets and Michael Choice of the Rangers doing the damage. d'Arnaud hit a two run shot against Miami to go with a strike out in four at bats. Choice only had two trips to the plate but made it count with a three run dinger late against Kansas City. Billy Hamilton and Jake Marisnick each had 2-4 games with a run scored but went about it differently. The Fastest Man in Baseball hit a triple, a single, and struck out once in four trips to the plate while Marisnick doubled, walked and struck out once versus the Nationals.

Masahiro Tanaka went up against Minnesota, lasting 5.2 innings while allowing three runs. He gave up five hits and a a walk with six strike outs and a hit batter. He was the lone Top 100 pitcher in action yesterday.

Tim Wheeler of the Rockies was on point in Colorado's tilt against Cleveland. He was 3-3 with a home run, his fourth so far, two singles, two runs scored and three driven in. Wilmer Flores was equally effective at the dish for the Mets. Flores played short stop and was 3-5 with his second homer of the spring, two singles, four runs batted in, and two runs scored. Stefen Romero knocked a double to match with his pair of singles to drive in one and score once for Seattle. Billy Burns was running all over the place for Oakland, swiping his 10th bag, hitting a triple, single and walking once. White Sox second baseman and reigning stolen base champ Micah Johnson was 2-4 with a double, strike out and a run scored.

Chris Beck toed the hill for the Sox from the Southside, tossing five solid innings, allowing only one run on five hits. He also walked one and struck out five. Stolmy Pimentel got the ball for Pittsburgh and was the victim of the long ball, allowing three in five innings against Philly. Each were of the solo variety and accounted for all the runs as he also allowed three more hits, no walks and three strike outs. Corey Knebel worked a clean frame, striking out one Blue Jay. Chad Bettis got the save against the Tribe, striking out two of three batters faced, and Mariners righty Dominic Leone worked 1.2 innings, striking out four with only a hit allowed.

Tim Wheeler of the Rockies takes home this honor today after hitting his fourth home run and driving in three. This might be a good time to remind you that in 2011, Wheeler hit 33 home runs for Tulsa as a 23 year old, with 21 steals to boot. 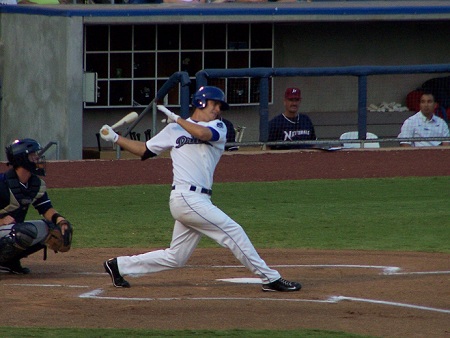