Roster moves, stats, and injury updates for players from Friday.

Hey folks, welcome to the Minor League Ball Gameday Thread for Saturday, March 22. It's Opening Day, technically, in Australia with the Dodgers and Diamondbacks facing off in a sold out tilt at the historic Sydney Cricket Ground. Interesting note - phenom Archie Bradley did travel with the team as they have still not decided whether to slot him in the rotation to start the year. Use this thread for any predictions you have for the series abroad.

Center fielder Jake Marisnick of the Miami Marlins turned in a solid all-around performance yesterday, going 3-3 with a double, a pair of singles, his fourth stolen base and two runs scored. Royals short stop Raul Mondesi got the start in a split squad game and went 1-5 with a run scored and pair of strike outs. Kolten Wong makes the list once again as he hit a double in three trips to the dish. Finally, Cubs short stop Javier Baez is making it really hard on Theo and Co. to not go North with him. He went 1-3 with a single and a strike out against the rival White Sox,

Aaron Sanchez continued to throw up zeroes for Toronto as they faced off against Tampa Bay. He allowed six base runners (three hits, three walks) in 5.1 innings with no runs allowed and a pair of strike outs. Diamondback stud right hander Archie Bradley struggled against Team Australia, allowing three runs in 3.2 innings. He gave up four hits and three walks with three strike outs and a home run to right fielder Tim Kennelly. James Paxton was the only other Top 100 pitcher to toe the rubber with four innings of work against San Diego. The Mariners southpaw allowed four hits and two walks with three runs allowed and four punch outs.

Outside the high end prospects, Tim Wheeler of the Rockies had another strong game, hitting his third home run of the spring with a single and strike out as well. Recent Cuban defector Aledmys Diaz was a perfect 2-2 in his debut for St. Louis with a pair of singles playing short stop. Cubs third baseman Mike Olt keeps on raking, going 2-4 with a double, walk, and a run scored. Neftali Soto went yard for the third time for the Reds, driving in three with a pair of strike outs and an error manning the hot corner.

Toronto right hander Aaron Sanchez is making a strong impression on the brass with the way he has pitched this spring. He just added to the dominance with 5.1 scoreless frames. 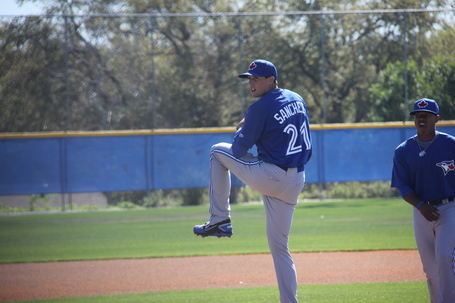