A look at stats from yesterday's action along with injury news, options to the minor leagues, and other roster moves.

Hello everyone and welcome to the Gameday thread for Friday. Last night we saw 14 games, including one tune up game between the Dodgers and the Australian National team in preperation for the first official game of the year Saturday.

Reds center fielder Billy Hamilton led the charge from the Top 100 position player, going 2-4 with a pair of singles, a run scored. Kolten Wong of the Cardinals smacked a double in his only at bat, and Tigers third baseman Nick Castellanos singled once in three at bats with a strike out as well. On the pitching side of the cat and mouse game, Zach Lee of the Dodgers started their exhibition contest against Australia and threw well over four innings. He allowed one run on three hit with no walks, a hit batter, and six strike outs. Jake Odorizzi of the Rays was the only other Top 100 pitcher to get on the bump. He threw the last four innings of the Rays/Twins game, allowing four runs (three earned) on six hits, one walk and three strike outs.

Of the players not in the Top 100, Aaron Hicks was unstoppable for Minnesota. The athletic center fielder was 4-4 with three singles, a double, and a run scored. Ernesto Mejia of the Braves hit his second homer of the spring while Jace Peterson of the Padres tripled and scored in his only plate appearance. Rockies outfielder Tim Wheeler and Astros catcher Carlos Perez each doubled in their only official at bats with Perez also coming around to score. Giants left fielder Juan Perez swiped his third bag of the spring in a 1-4 effort, and fellow outfielder Mitch Haniger of the Brew Crew went 1-3 with a walk and an outfield assist.

Only Chris Withrow and Arodys Vizcaino were members of their respective team's Top 10 prospect lists to pitch yesterday, with Vizcaino tossing a perfect frame and Withrow striking out the only two batters he faced. Brewers Rule 5 pick Wei-Chung Wang got the start yesterday and didn't do too hot, allowing three runs on five hits in just 2.2 innings. He struck out two without a walk, and also allowed a home run to Brandon Barnes and uncorked a wild pitch. Southpaw Mario Hollands of the Phillies threw 2.2 innings as well, allowing a run on a solo home run to Erik Kratz along with three other hits. He struck out three and did not allow a walk. One of the newest members of the Padres stable of young pitching, Jesse Hahn, threw a pair of scoreless innings with just one walk and a strike out.

Aaron Hicks gets the nod for Thursdays action with a perfect performance at the plate. 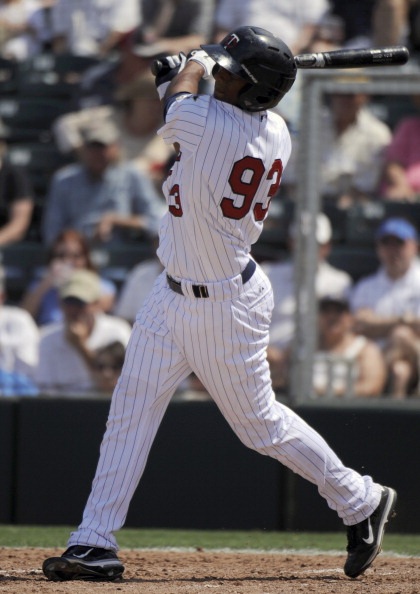