Good afternoon/evening everyone and welcome back to the Gameday thread. Once again there was not much action with Top 100 players, especially pitchers, yesterday. Of those that did, White Sox first baseman Jose Abreu, third baseman Matt Davidson, and Reds center fielder Billy Hamilton stood out for having solid days.

Abreu hit his second homer and a pair of singles, driving in three with a strike out as well. Davidson had a similar line, also driving in three and hitting his second home run. He only had one other hit, a single, and struck out twice in four trips to the dish. Billy Hamilton showed off what little power he has, hitting his first home run of the spring. All of that was overshadowed by the sixth inning when Reds lefty Aroldis Chapman threw a 99 mph fastball to Sal Perez and he took right back up the middle, hitting Chapman above the eye. Cleveland short stop of the future, Francisco Lindor, shined in what looks to be one of his final spring training starts, going 2-4 with a double and RBI.

Outside the Top 100, Billy Burns of the A's stole his ninth base in a 2-3 effort. Yankees Cuban left fielder Adonis Garcia turned in a double with two runs batted in over three trips while Twins center fielder Aaron Hicks reached base twice on a single and a walk with a stolen base, his first of the spring. Though not technically a prospect or even a rookie, White Sox outfielder Jordan Danks has shown some serious power lately, hitting his fifth home run yesterday.

With the news of Brandon Beachy planning to undergo his second Tommy John surgery, Braves right hander David Hale looks to have the inside track on one of the two spots in the rotation vacated by Beachy and Kris Medlen. He threw 4.1 innings yesterday, allowing three runs on five hits and three walks with two strike outs. Pirates right hander Brandon Cumpton had better results than Hale, only allowing one run on three hits and three walks in 4.2 innings with a pair of strike outs. John Stilson put up a scoreless inning for Toronto, allowing just one hit with a strike out as well. Oakland southpaw Drew Pomeranz threw three scoreless as well, striking out three with no walks and only one hit.

The biggest thing to come out of Cuba since Puig-mania, Jose Abreu earns Player of the Day honors by hitting his second home run, driving in three and adding a pair of singles into the mix. 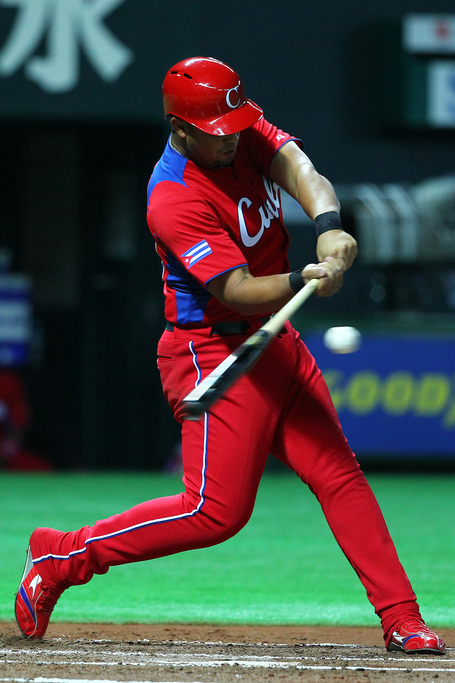