As my not-so-subtle handle indicates, I’m a Pirates fan so I am certainly biased. I desperately want Gregory Polanco to succeed. At the same time, I am higher on him than any other Pirates prospect that I actually remember which goes back through Kris Benson-ish (Midre Cummings was actually the first "prospect" I remember following but I mostly loved him because I had a rookie card with him and Rich Aude on it that made me believe he’d be a superstar). 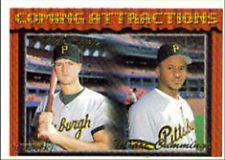 Having said that, I really believe Polanco is a slam dunk, Grade A prospect for a number of reasons. Perhaps the most significant is that, when I try to think of something that Polanco is lacking - something that will prevent him from being elite - I really can’t come up with anything. Let’s start with the stuff that will probably be less controversial; his arm, glove, and speed.

Originally scouted as a pitcher back in the Dominican, Polanco possesses a powerful throwing arm that should suit him well since he will be playing right field in Pittsburgh. He has traditionally been a CF, but as we saw with Starling Marte last year, the Pirates aren’t going to move Andrew McCutchen out of center even if one of the young’ins is probably the better defender.

Because of his speed, Polanco is able to cover a ton of ground in the outfield which would allow him to play CF even though he won’t for the Pirates. The organization made an effort last year to improve Polanco’s routes, particularly when going back on the ball. He was instructed to play unusually shallow all of last year to force him to become more comfortable going backwards. The end result was a marked improvement in reading the ball off of the bat and being able to use his speed to cover as much ground as possible giving the Pirates a legitimate defensive CF playing in the teeny-tiny RF at PNC Park.

He has it. Last month, Polanco was clocked at 3.77 seconds in a 90 ft. sprint (not out of the batters box, mind you). Just for fun, here he is beating out a chopper to first:

He stole 40 bases in 2012 and another 38 last year (although his efficiency took a hit in AA). His baserunning instincts are strong and he has the look of a 30+ steal major leaguer.

Generally, these are the tools that translate the best to the major leagues because they are more in the individual player’s control and less subject to the increased talent level of the opponent (a major leaguer does not hit a more difficult fly ball than a AA player). Polanco has a plus tool in all three areas giving him, IMO, an incredibly high floor. Even if he is simply an average hitter, you have an elite defensive corner OF with good baserunning ability. Brett Gardner, he of the career 97 OPS+ has used that formula to provide more than 6 bWAR per 650 PA’s. So the real question is what you think Polanco will provide offensively. Personally, I think it will be a lot.

Back in 2010, Polanco struggled as an 18 year old in his stateside debut. Since then, though, he has developed into a very polished hitter. His ‘11 numbers look rough at first glance, but a closer inspection reveals that he walked 12% of the time that year and had a perfectly fine 16% K rate. Most of his struggles in the GCL stemmed from an unusually low BAbip and some trouble driving the ball. Polanco put on a lot of muscle mass during the 2011-12 offseason, and it showed as he exploded onto the scene with an outstanding 149 wRC+ in the Sally League. His walk rate was strong at 9% and he rarely struck out, all while posting a .197 ISO. He followed that up with a similarly strong 1st half in A+ before moving to AA in June of last year. Again, he posted raw numbers that don’t jump off the page, but he walked as much as he struck out in Altoona and was hurt by a low BAbip. Facing the advanced competition of the DoWL, he was a beast this offseason, winning league MVP and ROY honors.

His swing is a bit long but his advanced approach and excellent bat speed allow him to compensate. He seemingly hits everything hard, hits a lot of line drives and has the ability to go the other way. He will likely be a little susceptible to hard, inside pitching (at least at first) but I don’t think that it will overwhelm him.

As I mentioned above, he drives the ball very well and has good power, but I don’t think his swing (as it is currently constructed) will generate a ton of HR pop because he is more of a line drive hitter. Having said that, I do think he is a 15+ HR guy right now, with the potential to be a 25 HR player. Plus as a LHH at PNC, he is not going to be hampered by the massive LF that tends to suppress right-handed power.

Just to be clear, I don’t think that Polanco is going to be a superstar hitter, along the lines of a Miguel Cabrera or a Mike Trout. I do, however, think he’s a superstar player because of the total package. I see no reason his overall contribution with the bat can’t mirror Starling Marte almost immediately (~20% above league average) with peak performances in the 30-35% range. That, coupled with his defense and baserunning (which I believe will be quite strong) gives you a 6-7 win player at his peak.

*Finally, I think it’s important to point out a common misconception that seems to come up every time Polanco is discussed. He is NOT a skinny or lanky dude (it doesn't come from John necessarily, it just always seems to come up). For whatever reason, some sites still report him as weighing 170 pounds which is just all kinds of wrong. Polanco is built like a truck. He was up to 220 pounds last January. Now, he’s 6-5, 230 pounds. Since 2009, he has put on 60 pounds of muscle, and not only has it not hurt his speed, he is appreciably faster than he was as a skinny teenager. It really bugs me when Polanco is described this way because it is horribly out of date information. If you were reading a scouting report on Miguel Sano and it kept talking about him as a shortstop, that wouldn’t be a particularly reliable report, would it? Yet Polanco is similarly mischaracterized by scouting reports talking about the 170 pound frame he had when he was 17. Here is a photo of GP from this offseason…does he look like he’s 6-5, 170? 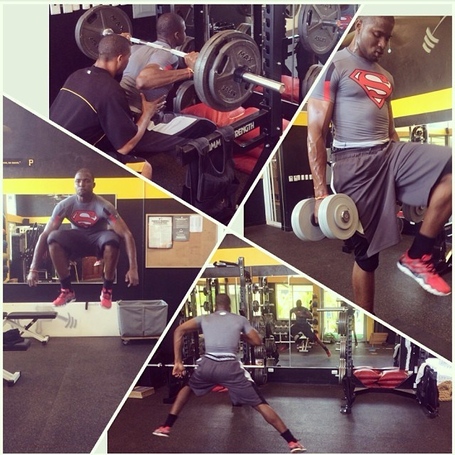