Hello everyone and welcome to the Gameday thread for Tuesday, where we recap Monday's action and discuss the goings on around the minor leagues. Weather got in the way of four contests, coming down hard enough to cancel the games all together. One other game was limited to five innings due to rain - the Braves/Astros affair. There wasn't much action but lets get to the highlights.

Nobody in the Top 100 hit a home run but there were still a few solid performances. Cardinals second baseman Kolten Wong has made fans forget about the loss of David Freese as he has been on fire. He was adding fuel to it by going 3-4 yesterday with a double and a run driven in, and through 12 games he is hitting .394 (13-33) with a pair of long balls, eight RBI, three walks, seven strike outs, and a 1.187 OPS. The new occupant of the hot corner on the South side of Chicago, Matt Davidson swatted a pair of doubles and drove in two with two runs scored and a punch out. He's only 7-30 this spring with a home run, three runs batted in, two walks and five strike outs. Both Wong and Davidson have a strong chance of earning starting gigs with their respective clubs.

Yordano Ventura was the star of the night though, breezing through six innings against a Texas line up comprised of mostly regulars. He struck out six, allowed four hits, no walks, hit a man and balked without leting a run cross the dish. Elvis Andrus went down twice looking, once on a 99 mph heater, and once on a hook. Shin-Soo Choo also went down twice, once on looking on a big bender and the second on a meek swing at a fastball. He got two more on curves (including Prince Fielder) and was very impressive doing so. Royals manager Ned Yost felt the same, calling Ventura his #3 starter ahead of veterans Jeremy Guthrie and Bruce Chen.

There weren't many standout performances outside the Top 100 either yesterday, with Tim Wheeler being the most productive with his second home run of the spring to pair with a strike out. Rangers first baseman Ronald Guzman got a pinch hit single while Billy Burns hit a pinch hit double and came around to score for Oakland. Tommy Medica notched another double for San Diego while working on his defense in left field.

Rule 5 selection Wei-Chung Wang continues to put up zeroes for Milwaukee despite not throwing a single inning above rookie ball prior to this season. He only allowed a hit in his frame and has extended his scoreless streak to 8.1 innings with four strike outs, no walks and just six hits allowed. A handful of relief prospects also made scoreless appearances, including Danny Webb, Neil Ramirez, Chad Bettis, Nick Maronde, Zac Rosscup and Rubby De La Rosa.

I've been thinking about adding this feature so I figured we'll see how it goes. Everyone is considered for this, regardless of prospect shine, age, league or age-relative-to-league. For Monday though, this honor goes to Yordano. 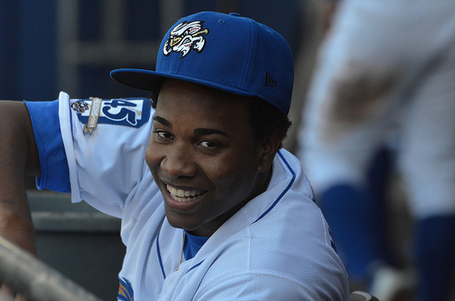