By golly, we have our first weekend of college baseball action in the books. Which means its time for me to write up my first weekend recap of the new season.

Okay, Happy new college baseball season everyone! As you may surmise from my SEC baseball preview, that is the conference I most closely follow as a South Carolina season ticket holder. However, my weekend recaps, if you actually read my amateur hack-ish writing from last year, will attempt to spread the focus throughout the entire country, highlighting any and all relevant teams and players, no matter the size, shape, location, or competition level of the conference. Without further ado, let's take a look at the noteworthy happenings over the weekend.

South Carolina swept Bucknell as I and every other person that doesn't hate money would've bet on. But, I don't bet...usually.

I was on hand for Sunday's game and got a front row look at highly touted freshman right-hander Wil Crowe, who was dialing it up to 91-92 MPH with an outpitch curve, en route to 6.1 no-hit innings. Gamecock fans couldn't have asked for a more promising debut.

Entering The Polls: Kentucky - A great way to go from unranked to ranked in one weekend is to take down a preseason hype machine like the Virginia Cavaliers on opening night and that's exactly what the Wildcats did. Draft prospect A.J. Reed picked up the win as the Wildcats tagged UVA starter Brandon Waddell for 6 earned runs in 4.1 innings.

Sweep Of The Week: Vanderbilt - The 'Dores had no problem making a trip out to Long beach State to start the season off with a sweep. Ace righthander Tyler Beede looked dominant (5 IP, 1 H, 0 R, 1 BB, 7 K) in his first outing of the year, detailed here by Baseball America.

Ole Miss also kicked off their season with a nice little sweep of Stetson. Stetson is typically a Top 100 RPI program most years in college baseball so, that's nothing nothing to scoff at.

Maryland pulled off an upset in Gainesville, taking game two from the Gators, 9-7 with outfielder Anthony Papio (3-for-4, HR) leading the way. Maryland could be a bubble tourney team this year and big out of conference wins will help their cause if that it is the case.

Stock Down: North Carolina - Defending ACC champs dropped 2-of-3 to College of Charleston. UNC won their first 16 games of the season in 2013 for what its worth.

Cal State Fullerton - The polls say so as the Titans are still ranked No. 2 in the country after taking 2 of 3 from Washington State. Sophomore ace Thomas Eshelman (7 IP, 3 H, 0 R, 8 K) and Senior OF Greg Velazquez (3-for-3, HR, 4 RBI) were the standout's in Friday's season opening 12-0 win.

Entering The Polls: Cal Poly - Nice little opening weekend for the Mustangs, who parlayed a three game sweep of No. 22 Kansas State into a ranking of their own, coincidentally replacing Kansas State at No. 22 in the latest rankings. Junior outfielder Nick Torres, a draft prospect, paced the offense (6-13, HR, 3 RBI).

Pitcher Spotlight: Matt Imhof, LHP - A name that you might want to start paying attention to? The Junior righty struck out a career high 14 against Kansas State, one of the better hitting lineups from 2013.

TCU took 2 of 3 from Jacksonville as they should, shutting the Dolphins out in both Game 1 and Game 2.

Pitcher Spotlight: Branden Finnegan, LHP - DRAFT NAME!!! He struck out 13 over 7 innings in his first start of the year and you can read a detailed report on him here courtesy of Baseball America.

Stock Up: Kansas - Usually a bottom feeder in this conference, the JayHawks kicked off their season right, with an impressive four-game sweep of BYU, usually a competitive program.

Ditto for Texas Tech, who should be getting some poll votes after taking 3 of 4 from N0. 16 Indiana.

Florida Atlantic - After dropping the season opener to Notre Dame, the Owls offense went wild in the next two games for 16-6 and 13-3 wins.

Still A Powerhouse: Rice - Year after year, Rice typically puts out a Top 25 unit, and this year looks no different. The RICE Owls (Wow, two teams called Owls in the same conference) went into Stanford and won the series, as they jumped up to No. 11 in the polls this week. First baseman Skyler Ewing batted .583 over the weekend.

Team On The Rise: UNLV - They completed a four game sweep over Central Michigan and Junior ace Eric Fedde (7 IP, 1 H, 11 K), a possible 1st rounder, put on a clinic in the season opener.

Road Warriors: Fresno State - The Bulldogs traveled to UC Irvine, usually one of the top units in the Big West, and left with a great looking series win. Draft prospect Chris Mariscal, a shortstop, went 4-for-14 with two doubles.

Upset of the Week (possibly of the year): Canisius over NC State: Wow, let's hear it for Golden Griffins pitcher Rohn Pierce, who tossed 7 shutout innings, outdueling Carlos Rodon (only the top draft prospect in the land), for an improbable Friday night upset win in Raleigh. Canisius is a hard-nosed senior ridden team that won the MAAC last year and is expected to do so again. They could be a super deep sleeper to watch if they get back into the NCAA tournament again, as this win indicates.

VCU - The Rams headed down to the Battle In Midtown hosted by Georgia Tech, and left victorious after Sunday's upset win over the host.

Chris Cook, 2B - George Mason - Cook was named Atlantic 10 player of the week after a monstrous weekend at the plate: 8 hits, 9 runs, two doubles, two home runs, and five RBI.

Stock Down: Indiana - Yes, aside from Indiana, the Big Ten is absolutely mid major level of competition in college baseball. And the much hyped Hoosiers woke up on the wrong side of the bed this weekend, dropping 3 of 4 at unranked Texas Tech. They dropped to No. 16 in the polls as a result.

Shameless family shoutout: Bruce Zimmerman, LHP - My cousin, a true freshman, made his collegiate debut for Towson on Sunday, picking up the win while tossing 5 shutout innings versus Georgetown.

Other Noteworthy Upsets: Western Carolina over N0. 7 Mississippi State and Eastern Michigan over No. 15 Clemson. Proof that no home opener is a gimme, no matter how favorable the matchup appears. Let's hear it for the directional schools!

Georgia Southern took two of three in Athens, for a satisfying rivalry win over Georgia.

Pitcher Spotlight: Sam Howard, LHP - The junior lefty dominated (5 IP, 3 H, 0 R, 1 BB, 7 K) in Georgia Southern's 9-3 win on Saturday. According to Kendall Rogers of Perfect Game, he was touching 93 MPH and could be a draft prospect on the rise.

Jo-El Bennett was the talk of the town in the Sun Belt this weekend as the outfielder from Troy bashed three home runs over the weekend to grab an early lead on the home run leaderboard. He was also named one of the national players of the week.

Meet The Number One Team In The Land...Oregon State - The Beavers took part in the Husker classic this weekend along with Gonzaga, Nebraska, and Pacific, winning all four games they played.

Top prospect in the Pac-12: Michael Conforto, OF - Well, according to BA. The reigning Pac-12 player of the year went 5-for-10 in the Beavers four wins, with 8 RBI.

Arizona State rebounded from a disappointing home opener loss to Baylor to win the series. The Sun Devils are ranked No. 19 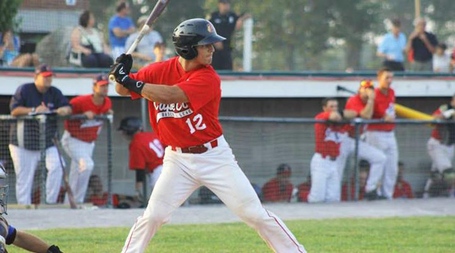 (Photo courtesy of Bourne Braves)
Player of the Week: Max Pentecost, C - Kennesaw State - There were many good candidates but I thought I'd give the nod to the small school guy with the cool name. Pentecost, widely viewed as the top player and top draft prospect from the Ohio Valley conference, batted .615 with a .688 OBP over the weekend as he obliterated Middle Tennessee State pitching. He also threw out two attempted basestealers, showing off his plus arm behind the plate. He also won Cape Cod league MVP over the Summer.

Pitcher of the week: Jeremy Null, RHP - Western Carolina - Dude went into Starkville, on opening night no less, and pitched the Catamounts to a huge upset win Friday night that I'm sure left a sour taste in many a Bulldog fans' mouths. He sat down seven of the first 13 batters faced, setting the tone early that the Catamounts were a worthy opponent. Final line: 8 IP, 3 H, 0 R, 1 BB, 12 K. Null is definitely someone to track as the Junior was named the preseason Southern conference pitcher of the year by the SoCon coaches.

If my recap isn't enough, be sure to check out PG, BA, and College Baseball Today.

Have a great week everyone.