A fire broke out at Fifth Third Ballpark, home of the West Michigan Whitecaps, engulfing the right field concourse and multiple luxury suites.

Around 11 AM, front office members and staff of the West Michigan Whitecaps noticed smoke coming from a luxury suite on the first base side of Fifth Third Ballpark. All 30 employees on site were evacuated as the fire spread and engulfed 11 luxury suites and the right field concourse. Twitter member John Gonzalez (@MichiganGonzo) and WZZM13's Hannah Saunders (@Hannah_Saunders) posted these pictures of the stadium as the fire raged on. 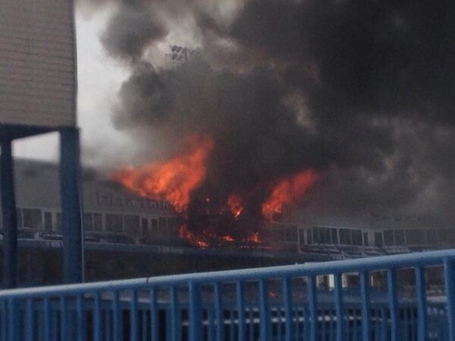 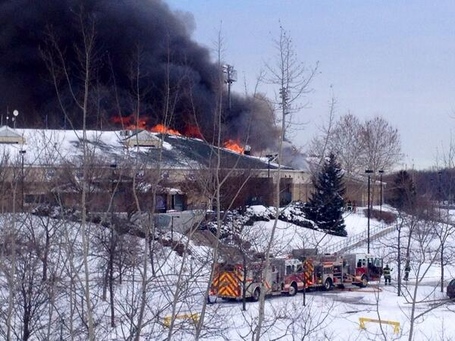 According to Whitecaps director of marketing and media Mickey Graham, the damage was "significant" and "everyone was evacuated from the stadium", as told to milb.com. About two hours after the blaze started, a section of the stands on the first base side of the stadium collapsed. The Plainfield Township Fire Chief, David Peterson, told local news station WOOD around 12:30 PM that, "For whatever reason the sprinkler system isn't holding it back. We're using [aerial hoses from ladders] from the exterior -- the fire has weakened the roof and structure so that we're not going to put people inside." Crews from the Plainfield Township Fire Dept had difficulty getting the fire under control due to numerous issues.

One factor was the temperature as it was just 10 degrees outside and multiple water lines were frozen. Another was lack of accessible fire hydrants near the stadium. Only two hydrants adjacent to the stadium were available as crews had to find other hydrants nearby to use. By 2 PM the fire was back under control but the damage had already been done.

When WZZM 13 spoke with co-managing partner of the Whitecaps, Denny Baxter, he resolutely declared "We will rebiuld; we will play baseball this spring...". He also mentioned "We can reopen without everything being rebuilt" as the playing field was not harmed during the blaze. The ticket areas and the team's front office were also spared.

This is certainly a less-than-stellar way to bring in the new year for the Whitecaps and the Tigers organization. Hopefully all will be remedied by opening day and luckily there were no injuries reported. While it may set the team back a bit, baseball will go on and I wish the best of luck to everyone involved.

Reports from Baseball America, MiLB.com and WZZM13.com were used in compiling this article