Share All sharing options for: San Diego's haul from the Forsythe/Torres trade

On Monday, Chris Cotillo of MLB Daily Dish was the first to report that the Padres and Rays were close to completing a deal centered around utility infielder Logan Forsythe and left handed reliever Alex Torres. Yesterday, Keith Law reported that four minor leaguers will be included in the deal as well. Right handed pitchers Brad Boxberger, Matt Andriese and Matt Lollis, along with second baseman Maxx Tissenbaum, joined the package headlined by Forsythe to Tampa Bay while right hander Jesse Hahn joined Torres in heading to San Diego.

Here is also a little about the players involved that are heading to the Padres. Hopefully John will be able to spare some time to give his thoughts on each. I will include John's report for each player from the 2013 Baseball Prospect Book (there's still time to pre-order the 2014 edition here!) as well if they made the cut.

In 2009, Torres spent the first half of the season back at Ranco Cucamonga, throwing 121.1 innings through July. He had a 2.74 ERA with 9.2 K/9, 4.7 BB/9 and just 6.9 H/9 before getting promoted to AA Arkansas. He only spent a month there, making 5 starts before being packaged with 3B Matt Sweeney and a PTBNL (who turned out to be SS Sean Rodriguez) for LHSP Scott Kazmir in late August. He finished the year out in AA Montgomery making only two starts. For the entire season he threw 156 innings with a 2.77 ERA, 9.0 K/9, 4.9 BB/9, 7.1 H/9 and a 1.33 WHIP. His fastball occasionally tops 90 mph but because of varying arm angles and plus movement hitters had trouble squaring it up. He also featured a pair of tight, sharp breaking balls, both a slider and curve along with a developing change up and below average command.

Torres spent all of 2010 back in AA Montgomery, taking the hill 27 times and racking up 142.2 innings. He allowed 8.6 H/9, 4.4 BB/9, 9.5 K/9 and a 1.44 WHIP with a 3.47 ERA and almost indentical FIP. He led the Southern League in strike outs with 150 and was a member of the Future's Game at age 22. His change up improved by leaps and bounds, becoming a second plus pitch in addition to his fastball. His breaking ball has been described as both a slider and curve, but either way it had the makings of another plus pitch for Torres. Not only does he have a cross-body delivery, but he almost falls over after completion which gives him great movement and deception but hinders his command quite a bit.

He was sent back to AAA to begin the following year and everything fell apart for Torres. He couldn't find the strike zone even if the catcher's mitt and ball each had magnets in them. He was first demoted to the bullpen and then was even demoted back to the GCL in August to work on repeating his delivery. He finished the season with a brutal 6.72 ERA over 80.1 innings with 8.6 H/9, 7.5 BB/9, 12.1 K/9 and a 1.79 WHIP. His control obviously regressed dramatically but the rest of his offerings still had good velocity and movement.

Torres garnered plenty of accolades during his ascent through the minors. In 2008 he first broke through Baseball America's top 30 players in the Angels system, ranking 24th. After his 2009 breakout and subsequent trade to the Rays, he moved up to 9th in the Tampa system, 14th in the California League and had the best slider in the Rays organization. In 2010 he moved up to 6th in the organization, 12th in the Southern League, was once again named as having the best slider in the system and also was tabbed as having the best change up in the Southern League. After 2011 he was still ranked 6th in Tampa's farm and dropped all the way to 32nd after his disastrous 2012 campaign. He lost prospect eligibilty this past season.

Looking forward with Torres, as long as he remains in control of his delivery and he doesn't have another bout with wildness like 2012, I could see him being a key component of the Friar's pen this year. He will probably set up newly signed closer Joaquin Benoit as I see him as more than just a LOOGY. There is always the chance that San Diego will try to stretch him out but that would be highly unlikely, especially considering the depth the Padres have that is nearly MLB ready. 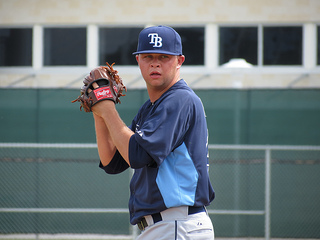 The physically imposing Hahn towers on the mound at 6'5 with a lanky build. He missed the entire 2010 and 2011 seasons after succumbing to Tommy John Surgery. His talent was worthy of the first round and he would have been selected there if not for the elbow issues which cropped up in the spring before he was drafted. He signed for $525K and made his professional debut in 2012 as a 22 year old in the short season New York-Penn League. He suffered a broken foot in March and didn't kick off his season until May.

He made 14 starts spanning 52 innings with excellent results. He had a 2.77 ERA, did not allow any balls to leave the park, and gave up 6.6 H/9, 2.6 BB/9, 9.5 K/9 and a stellar 1.02 WHIP. His most impressive stretch came in his last four starts as he threw 20 innings and allowed just eight hits, one runs, two walks and struck out 24. He was death on righties, limiting them to a .180/.219/.250 line with a 31/5 K/BB ratio, while lefties hit .220/.305/.297 against him with 10 walks and 24 punch outs. He did so utilizing a 94-96 mph four seam fastball that can touch 99 in relief, a heavy two seam fastball 91-96 mph with a lot of sink, a 12-6 curve with sharp drop, low 80's slider, and a change up. He needs to be careful with the curve as he changes his arm slot which can tip the pitch to hitters.  The slider is an average pitch that can get slurvy on him if he's not careful and he did not re-introduce it to his repertoire until late in the season. The change has fade to it and has great action when he buries it in the bottom of the zone. Mechanically he struggles to get consistency in his release point and is a bit rigid in his delivery but he gets great downhill action.

Following the 2012 season he was tabbed as having the best fastball in Tampa's farm, as well as taking home the #14 spot on the top 30 and 13th in the New York-Penn League according to Baseball America. John ranked him 18th in Tampa's system with a C+ grade, noting his lack of stamina along with his command and health issues but electric stuff. Here is a snippet of the full profile:

SLEEPER ALERT!! VT's Jesse Hahn was going to be a first round pick in 2010 until he hurt his elbow in the spring, dropping him to the sixth round. He missed 2011 recovering from Tommy John surgery, but he came back in 2012 and was very effective in the New York-Penn League, working at 92-94 MPH and hitting 98-99,at times, which was even better than he threw in college...Rays fans are aware of him, but he might be forgotten by the broader national audience. He shouldn't be, so I'm sticking the Sleeper tag on him. A healthy Hahn could become a number three starter, perhaps more. Grade C+

Hahn has a chance to become a really, really good starter and I don't think people realize this because of his age. He will be 24 next year and starting at AA Montgomery, but the kiddie gloves should be off now that he's another year removed from his Tommy John surgery. If he does well in Montgomery he will have a very good chance at moving fast with his repertoire and pitchability.