Boston Red Sox designated hitter David Ortiz pushed past 2,000 hits this past week. At age 37, he's having one of the best seasons of his career, hitting .311/.394/.559 with an OPS+ of 155 through 120 games. For all the greatness of the last decade, his early run in the majors wasn't a smooth one. He was certainly an interesting prospect, though, so let's look how Big Papi fared in the minors with today's Prospect Retrospective. 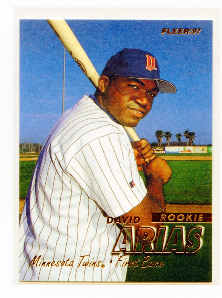 A lot of people don't realize this, but David Ortiz began his career in the Seattle Mariners system, signed as a free agent in 1992 out of the Dominican Republic. He hit .246/.309/.299 as an 18-year-old in the Arizona Rookie League in 1994, hardly impressive performance. But he improved to .322/.409/.538 repeating he AZL at age 19. At that point, he would have rated as a Grade C prospect, needing to show he could repeat this at higher levels. At the time, Ortiz was known as "David Arias."

Despite his excellent season, the Mariners, looking for veteran hitting help, traded him to the Twins for Dave Hollins in the off-season. I gave him a Grade B in my 1997 book, noting that the Twins got a good deal and that the Mariners would probably regret trading Arias.

In the spring of `97, David started going by Ortiz rather than Arias, after he brought the error with his name to Minnesota's attention. He was also nine months younger than listed in his official records. He rose rapidly through the Twins farm system that year, hitting .331/.390/.566 in 61 games for Class A Fort Myers, then .322/.376/.585 in 69 games for Double-A New Britain. He appeared in 15 games for the Twins late in the season, hitting .327. I gave him a Grade B+, rating him as the Number 49 prospect overall in baseball heading into '98. This was a fast rise, going from A-ball to the majors in less than a year and hitting well at every level.

Although his power was impressive, there were concerns about his defense, his weight, and a big swing that didn't fit into Minnesota's contact-oriented philosophy. Ortiz spent most of '98 with the Twins, hitting .277/.371/.446 in 86 games, OPS+111, quite solid for age 22. The bat was potent, but Twins manager Tom Kelly rode Ortiz about his glovework and publicly complained about his strikeouts. Some Twins fans felt that Ortiz was being treated unfairly, while others agreed with Kelly's critique.

Signed by the Red Sox as a free agent, he broke out with a .288/.369/.592 season, 31 homers, 144 OPS+. He was 27 years old, the classic season for a dramatic improvement. With a new organization that wasn't paranoid about strikeouts, he was able to unleash his natural swing and raw power.

"Something in my swing was not right in Minnesota. I could never hit for power. Whenever I took a big swing, they'd say to me, ‘Hey, hey, what are you doing?' So I said, ‘You want me to hit like a little bitch, then I will.'"

As you likely know, he also tested positive for PEDs in 2003 as part of a general survey of the MLB player population. This was revealed in 2009 and to this day Ortiz denies having taken steroids. The details of the '03 tests are still murky, with over 100 players testing positive for a variety of different substances. Whatever was going on in '03, Ortiz has tested negative ever since, passing several tests every season. With clean tests for a decade now, I think he has to get the benefit of the doubt. Certainly a presumption of guilt is unjustified.

I don't regard Ortiz's performance boost in 2003 as particularly suspicious. He was 27, the classic breakout age. He was with a new team that wasn't trying to turn him into a contact hitter, and his minor league performances had always shown he was capable of being outstanding. He dominated minor league pitching; his major league performance didn't just come out of nowhere unexpectedly, and even in Minnesota he had periods of excellent production.