The Houston Astros selected shortstop Carlos Correa first overall in the 2012 Major League Baseball draft and he now finds himself playing for the Quad Cities River Bandits in the Midwest League at just 18-years-old. Through the month of June he was hitting a very impressive .323/.408/.457 with 33 walks and 49 strikeouts in 293 plate appearances. His strong performance had him named as the starting shortstop in the Midwest League All-Star game and also just had him named to the 2013 Major League Baseball Futures game.

I had a chance to see him play at the Midwest League All-Star game, so here is some batting practice and game footage of him from the game if you would like to watch him swing the bat.

The teenager is certainly having a very strong season at the plate with a high average, good walk rate and good power for someone his age. Let's take a deeper look at where most of his production is coming from.

Here is a spray chart to take a look at where he is hitting the ball. 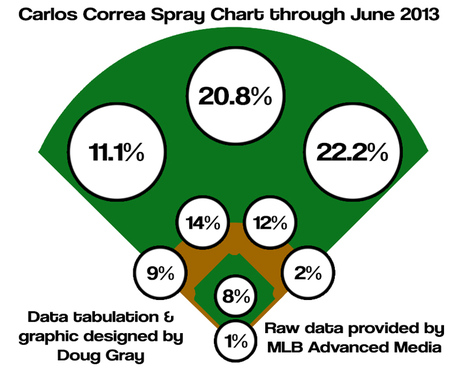 So far during the 2013 season Correa has gone to right field twice as often as he has pulled the ball to left field. He also seems to go up the middle quite a bit with plenty of balls to center, short and second base.

With the knowledge of where he hits the ball, let's take a look at how often he gets a hit when he does to each position. 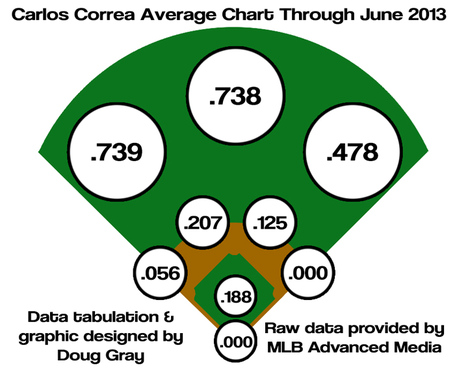 A few things really jump out when looking at his batting average to different positions. While Correa goes the other way more often than he does anywhere else, he is hitting significantly lower when he does go the other way than pulling the ball or going up the middle to center. The shortstop has speed in his game, but he isn't a plus runner. With that said, he has been able to do well with infield hits as he has spread thirteen of them around the infield thus far.

While average is an important part of the offensive game for a player power is also an important factor to look at. Let's look at how much power Carlos Correa hits for to each positions. 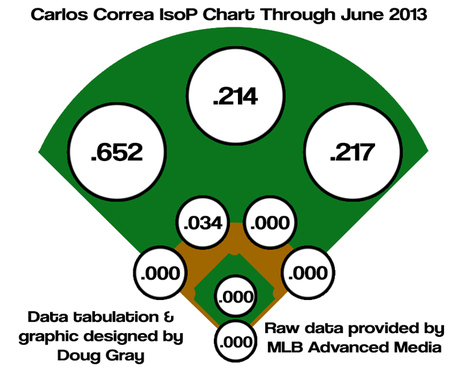 To this point in his career Carlos Correa is showing most of his power to his pull side where his Isolated Power (batting average subtracted from slugging percentage) is much higher than to center or to right field where he has been the same, but not showing much power to either spot. He also has a double that was first reached by the shortstop, which is why his Isolated Power is .034 to the position.

The first overall pick in the 2012 draft has been very successful in his first full season and downright outstanding considering that he is still just eighteen. He has shown that he is clearly willing to use the entire field in his approach and is already showing good pull power while hitting for a high average and showing strong plate discipline. While his tools were enough to warrant plenty of praise he has come out in 2013 and shown not only the tools but plenty of polish in his game as well.