The top pitching prospects in the International League

An inside look at the top pitchers in the International League and how effectively they've pitched through the first month of the season.

Share All sharing options for: The top pitching prospects in the International League

The International League is home to some of the Minor League's best pitchers, one of whom has already earned a promotion to the big leagues and four others who are on the doorstep. This season there are five of John Sickels Top 50 minor league pitchers throwing in the Triple-A International League.

1. This is a floated element, so place before the paragraph you'd like it to float beside

TOP 50 PITCHERS IN THE IL

This article looks at some of their top performers in Triple-A this season with a particular interest in the best Gamescores (GScr) of each pitcher. A GScr is a stat developed by Bill James that grades pitchers on how deep they go into a game and effectiveness. Most of the stats collected are through May 6.

The Pirates top prospect, Gerrit Cole is considered one of the top three pitchers going into this year's minor league season. Cole was selected in the first round twice in his amateur career, most recently No. 1 overall by the Pittsburgh Pirates in 2011. Considered an elite prospect by many publications, this was John Sickels review on Cole:

"His stuff is amazing. His fastball operates consistently at 94-98 MPH and frequently hits 100. He has a killer slider that gets into the low 90s. He also has a very decent changeup, and he'll mix in some slower curves at times, giving him four pitches."

So far, Cole's top game score of 68 is impressive, but he's capable of better and he's struggling right now with his control which is affecting his ability to strike out batters. Both numbers are creeping towards each other and it shows in his SIERA which sits at 4.98 even though his ERA is 2.45. Cole is aware of the issues he needs to work on and that's one area scouts love about him. He's always searching for ways to improve himself as he recently shared with MiLB.com.

"I wasn't tremendously efficient, I had a lot of walks, but I kind of got lucky at times when I made a pitch and they swung at it. I've only gone through the fifth inning twice. I don't care what the ERA is, I need to improve."

It's hard to believe the Rays have stockpiled so many solid pitching prospects in their system, but add Chris Archer's name to that arsenal. Archer is another pitcher who can touch the high 90's with a solid slider, but his changeup is a weapon that hasn't been developed enough to take him to the next level. So far this season his game scores have reflected that fact, going from a game where he allowed three home runs and received a GScr of 35, to the next game when he earned a 69 by throwing a six-inning shutout and holding the offense to only four hits. Archer was held out of his last start after being struck on the right calf in the second inning of his start on April 30th. The Rays aren't too concerned with what they called a "minor right calf contusion."

Add Jake Odorizzi's name to the Rays armory. Tampa Bay acquired Odorizzi for James Shields in the offseason and the young pitcher has been solid. His last outing was a seven inning no hitter, which earned him a GScr of 76. Jake is striking out batters at an impressive clip and is avoiding the long ball - except for that three home run game where he allowed only four hits. Look for Jake to get a shot at the rotation in the near future, if Archer doesn't beat him to it.

The Cincinnati Reds are a team with their own collection of top flight pitchers. This list doesn't even include Tony Cingrani, who started in the International League but was promoted after three starts. The other ranked pitcher in the Reds system is Dan Corcino from the Dominican Republic. Corcino has been with the Reds since he was 17 pitching in the Dominican Summer League and who has drawn comparisons to another Dominican pitcher in the Reds system, Johnny Cueto.

Now at 22, Daniel is a phone call away from the big show. Yet, his game scores reflect a player not quite ready for a promotion as he's struggled to make it beyond the fourth inning in half of his starts. His best game was at the end of April when his GScr was a 60, but he also has plenty of sub 40 scores -- which doesn't help his image of eventually becoming a bullpen arm.

Allen Webster came to the Red Sox as a converted infielder as part of a blockbuster trade from the Dodgers. He has excellent stuff, featuring a nasty sinker that he uses to enduce a 51% groundball rate. His game scores have been solid and reflect the best outings out of the four top pitchers in the International League. Webster was good enough early in the month that he earned a spot start for a double header on April 21. Since returning to the Pawsox he's performed just as well, earning his first win in a two hit performance with nine strikeouts. 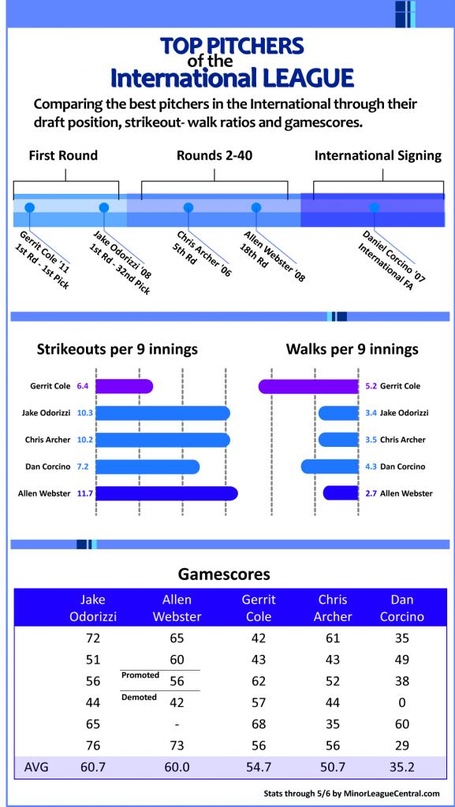