A look at the top pitchers from the 2012 draft and how high they've been promoted. Also a table and infographic of the top performers from last year's draft class.

Share All sharing options for: Top performing pitchers from the 2012 Draft class

As everyone is gearing up for this year's Rule 4 draft, I thought it would be fun to look at players from last year's draft to see who is performing the best a year later. This week's article is a look at the top performances of pitchers from the 2012 draft.

Orioles starter Kevin Gausman is the first starter of the 2012 pitchers to be promoted to the Major Leagues. Gausman was selected with the fourth pick overall and has spent this year in Double-A, where he demonstrated good command and a solid strikeout rate. Gausman is the type of pitcher who can touch 98 with his fastball, but also owns one of the best changeups in this draft class. He has a 3.11 ERA through eight minor league starts.

The Orioles had him working on his slider in the fall instructs and were considering changing their Double-A team to a six man rotation just so he could have more time to work on it between starts. Gausman demonstrated enough improvement on his slider that he was promoted this week and is expected to make his Major League debut later today.

Gausman will be joining Paco Rodriguez and Mike Roth in the show. Paco was the first of the 2012 draftees to reach the majors. A second round pick of the Los Angeles Dodgers, Rodriguez has appeared in 33 professional games and posted a 2.82 ERA out of the bullpen. Meanwhile the Angels ninth round pick Mike Roth debuted as an emergency starter in April of this year. Roth struggled after being rushed to the majors and was demoted to Double-A Arkansas last week.

Michael Wacha is the only pitcher from last year's draft class who has thrown least 20 innings in the Triple-A level. The Cardinals 19th pick in the first round, Wacha is considered to have a high floor because of his solid fastball-changeup combination. His strikeout rates have been suppressed this year because he lacks a third pitch. However, he's also been tough to hit and has allowed only a .187 average against him.

The Atlanta Braves second round draft pick, Alex Wood, is having a solid season in Double-A Mississippi. He has a 1.26 ERA through nine starts and at one point went five consecutive games without allowing a run to score. In addition he hasn't given up a home run yet this season. The Braves prospect turned heads early this year and received an unexpected compliment from starter Tim Hudson during spring training:

"Alex Wood is legit, his stuff is nasty."

I had a chance to see the Rangers fourth rounder Alec Asher pitch in the JUCO World Series last season, so it's pretty cool to see him performing well in High-A a year later. The big righthander has already been adopted as an honorary Texan and he's showing his mettle in the starters role where he's allowed only a .588 OPS against and has an 11 strikeout performance to his credit.

Asher throws in the mid 90's and was able to touch 97 in a closer's role last year, after being moved back into the rotation this year he's throwing more sliders and changeups, although his fastball seems to be his out pitch as he told Lone Star Ball earlier this month.

"I was going to make them prove they could hit the heater, and they never did so I didn't really resort to much offspeed."

Rockies Supplemental First Round pick Eddie Butler is having a strong campaign in Low-A Asheville. It's not too often that a pitcher can post a 69% groundball rate with solid strikeout numbers to go with it, but that's where Butler is at. Eddie has a 1.66 ERA through nine starts and has been pitching efficiently deep into games. He is one of the few pitchers to exceed an 80 game score this year and in fact he's done it twice.

Butler touches 99 on his fastball and mixes in a sinker and slider. His secondary pitches are still a work in progress though and it's affecting his control:

Max Fried and Josh Hader are a couple of teenagers from last year's draft who have begun to make a name for themselves. Fried was drafted by the Padres with the seventh overall pick last season and was part of the minor leagues first no hitter this year. He struck out eight in 5.2 innings and walked four. Fried's stock had slipped a little at this time last year, because he showed signs of fatigue in his high school starts and a loss in velocity. So far there's been no signs of wear this year as Fried sports a 1.96 ERA through seven starts and a solid strikeout rate.

Hader was selected later in the draft, in the 19th round, and probably would have gone undrafted except for a Baltimore scout catching his final game where he struck out 13. A lefthander with a three-quarters arm slot, Hader has a 1.96 ERA in seven starts this season and is holding opponents to a .165 batting average. After being selected by the Orioles, Hader has improved a few ticks on his fastball and touches 94.

The next few weeks represents the last chance for the 2012 draft class to be the new guys on the team. After the June draft they'll be looking over their shoulders as the next wave of Gray's and Appel's ascend through the systems.

This table shows only the top pitchers in each league based on ERA and IP, for a more complete table click this LINK 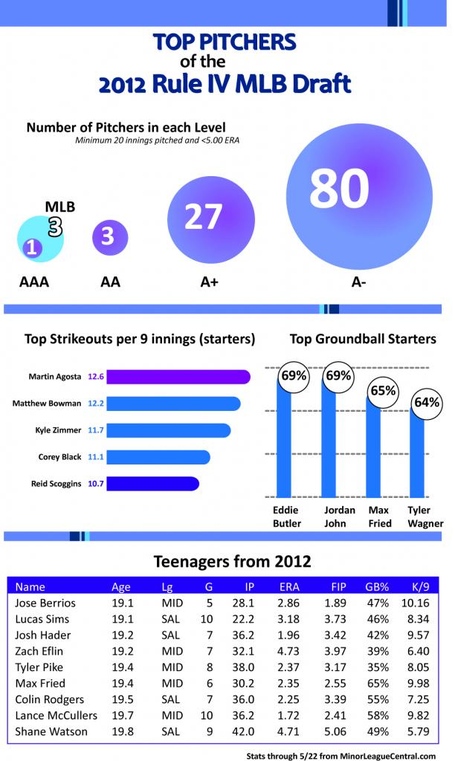