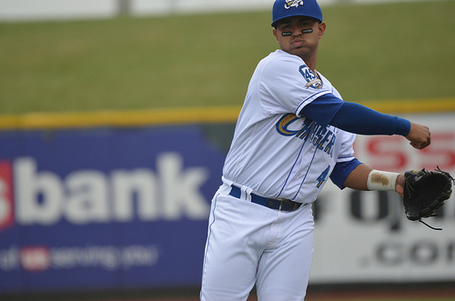 In a way, the game was indicative of the way his career has gone so far.

Colon is Baseball America’s 13th ranked prospect in the Royals organization. Typically, he gets off to a slow start each season and then battles his way toward respectable numbers. He’s a career .271 hitter with a .336 OBP.

He was 0-for-2 in his first two plate appearances last night, and while playing second base for only the eighth time this season (compared to 28 games at shortstop), he committed a throwing error to first base in the first inning when he attempted to make the turn on a double play ball hit by Tucson first baseman Brandon Allen. It was a play he should have made and he said so after the game.

"He’s a bigger guy who hits the ball out of the ballpark," Colon told me after the game. "And he hit it hard, so I had more time than I really thought. At shortstop, I’m used to getting rid of the ball quickly. I could have just taken my time. I need to get better at things like that. It’s something you have to be ready for pre-pitch. It’s just a matter of playing there every day and getting comfortable."

He has only played second base 44 times in his career, but he says he enjoys the position. He took some extra infield practice at second base before the game, working with Royals minor league infield instructor Glenn Hubbard.

"I think it’s where I’ll end up eventually, so I’ve just got to stay with it," he said.

Expectations were high for the 2010 first round draft pick by the Royals, just as they are for any first round pick. And he is a work in progress when it comes to dealing with that type of pressure. If I read between the lines of his comments properly, he believes he didn’t respond well to the pressure early in his career and he got down on himself.

In fact, he still has the tendency to get down on himself and says he was tempted to do so last night after the throwing error early in the game. Throw in the criticism he has heard from some fans over the past couple of seasons and he knew he needed to make a change.

Because of the criticism?

"Yeah, some people are going to love you and some people are not going to speak well about you. I can’t control that, really. The only thing I can control is to come out here and stay positive and know the kind of player I am. There’s a reason why I was picked there [fourth overall] and just be confident in myself."

Has the criticism contributed to his slow starts over the course of his career?

"I think it has, yeah, I think it has," he said. "It’s a learning process for me. Coming out of [Cal State] Fullerton in college, it wasn’t really like that. It was always good support, but as you keep going the competition level is better. You have to make adjustments and give yourself some leeway and not beat yourself up."

He says he’s not reading anything that’s written about him anymore. Maybe it’s helping.

He’s also beginning to show a little pop in his bat. He has hit five home runs in 40 career Triple-A games (35 of which he has played this year) opposed to the 16 home runs he hit in his previous 267 professional games at lower levels. So his Triple-A ratio is 8-to-1 while his ratio at lower levels was 16-to-1.

When he stepped to the plate last night in the seventh inning with the game tied 8-8, he recognized it as an opportunity.

"The infield was in, there was one out and a runner on a third," he said. "I just wanted to look for my pitch – something up in the zone that I could drive. I got a [1-1] fastball, middle in and I was able to get to it and the wind helped it out."