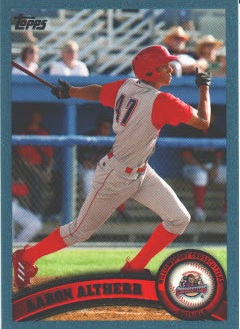 The Philadelphia Phillies have a long-standing reputation for focusing on pure athleticism and raw tools in their draft approach. They have often invested heavily in superior athletes who lacked actual baseball skills, on the theory that they could teach them what they needed to know. This approach has brought mixed results, with 2008 first-round pick Anthony Hewitt being the most extreme example.

One of these uber-athletes looks like he is taking a step forward this year: outfielder Aaron Altherr at High-A Clearwater in the Florida State League. Drafted in the ninth round in 2009 from high school in Buckeye, Arizona, Altherr is a 6-5, 190 pound right-handed hitter and thrower, born January 14, 1991. He is an outstanding overall athlete with wiry strength, above-average speed, and a good throwing arm.

Performance-wise, it's been more difficult. Altherr has struggled to refine his plate discipline, keep his swing consistent, and tap into his natural power. He was merely adequate last year in the South Atlantic League, hitting .252/.319/.402 with 25 steals, 38 walks, and 102 strikeouts in 420 at-bats. His defense was considered well ahead of his hitting.

2013 has been much better: .348/.413/.576 through 25 games for High-A Clearwater in the Florida State League, with 11 walks and 21 strikeouts in 92 at-bats. He's also stolen six bases without being caught. Reports indicate that his swing is much improved and that he's doing a better job handling pitches on the outer half of the plate, which gave him trouble before.

Altherr is now 22 years old. If he'd gone to college, 2012 would have been his draft season. Although we need a larger sample size of course, he's playing the best baseball of his life right now, and the tools have always been here. If he remains hot, he'll vault up prospect lists for 2014.