Continuing with my player notes from the Cedar Rapids Kernels: 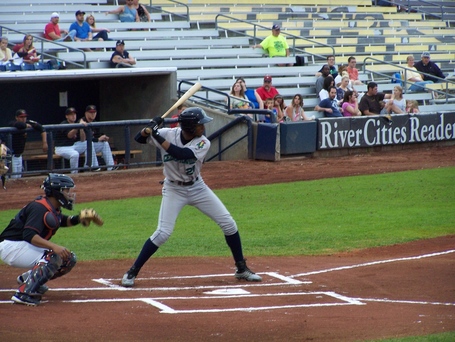 Niko Goodrum, SS: Goodrum was a second round pick in 2010 from high school in Fayetteville, Georgia. He spent two years in the Appalachian League with mixed results but is performing well so far this year in the Midwest League, hitting .291/.413/.427 through 32 games, with 24 walks and 32 strikeouts in 117 at-bats.

Goodrum is a switch-hitter listed at 6-4, 190. He's gained at least an inch and 20 pounds since high school and may not be done growing. His athleticism really stands out on the field; I felt he was second only to Byron Buxton in terms of quickness and agility in the pre-game workouts. He also has a very strong throwing arm, easily the best I saw during infield drills. His primary position is shortstop, but unfortunately he was the DH in the game so I didn't get any sort of valid read on his in-game range and footwork. There has been talk of moving him to the outfield, but so far he's still an infielder.

Although Goodrum went 0-for-5 in the game with a strikeout, I thought he looked pretty solid as a hitter. He was very patient, worked the count well, and showed better-than-average bat speed. His swing is level and his power is still prenatal, but there's some zip in that bat and I wouldn't be surprised if more home runs come in time. He laid off the outside stuff that annoyed the other Cedar Rapids hitters, but had some problems with a couple of pitches low-and-in.

He is still officially listed at 5-11, 165, but looks more like 6-0, 180, if not 190. A switch-hitter, he was selective in this game despite drawing just nine walks in 141 at-bats so far this season. His swing from the right side looked level but comes through the zone quickly. From the left side I thought it had more uppercut and home run potential, although perhaps not as much potential for batting average. Interestingly, he's hit better from the right side (.500/.500/.607) than from the left (.283/.328/.434) this season. Overall, I like his bat.

Polanco was signed as a shortstop but has lost enough range that most scouts see him as a second baseman and he has spent most of his time there this year, although he was at shortstop in this contest. His arm was good enough for short, but it was hard to tell much about his range based on just one game. I didn't see anything to make me think that the consensus about his future position (second base) is wrong.

I think he projects well as a second baseman/emergency shortstop with an above-average bat for the middle infield.

My photos of Polanco came out too blurry to use. Sorry about that.