Everyone say "hi" to Joe Cialone, our third College Baseball correspondent who will provide some in-person reports for us along with the coverage provided by Brendon Booth and Chris Slade.

Yes, we have some minor league correspondents on the way for 2013 as well. But for now, here's Joe.

Greetings everyone and welcome to my first post as a college baseball correspondent here. I’m excited to share my love for the sport with everyone here, and I’ll make a formal introduction soon. Today, however, I’m headed to Louisiana for a wedding and to catch (hopefully) a couple games. I want you all to enjoy my stories as much as I enjoy posting them, so feel free to leave feedback and suggestions below. The low quality photo below was taken by me, and the high quality photos were taken by a friend.

Now on to the good part.

I spent this past weekend on the road in Florida battling, of all things, the cold weather. A friend and I spent Thursday night in Orlando, looking forward to visiting two of the premier college baseball programs in the country. On the slate this weekend: streaking Miami at struggling Florida on Friday night, then off to Tallahassee for Villanova at Florida State on Saturday and Sunday.

First thing first, we had a day to kill before the Florida game and only a couple hours on the road in our way. So we did what any reasonable baseball fan would do and caught a spring training game in Kissimmee (Cardinals at Astros). I know this is supposed to be a college post, so I’ll only make one observation: there seemed to be a disproportionately high number of Cardinals fans with pony tails. Do with that information what you please.

So, on to Gainesville we went, eager to take in what would be a marquee matchup in most years. Florida has dominated Miami in recent seasons, but if ever there was a time to change that trend, this would be it. Florida was reeling after being swept by Florida Gulf Coast and losing a midweek game to North Florida.

We arrived at our hotel, the University of Florida Hilton just before sundown, and took the short 1.5 mile walk to McKethan Stadium. Upon entering the stadium, it was easy to gauge the frustration in the Gators fans’ voices and the optimism of the Hurricanes. Regardless of affiliation, fans of both teams were united in their shivering. Gusty winds accentuated the bitter cold, and this sure did not feel like Florida during baseball season. Desperate times called for desperate measures, so I bought BBQ nachos just to have something warm in my lap. Side note: that’s about all these nachos are good for. 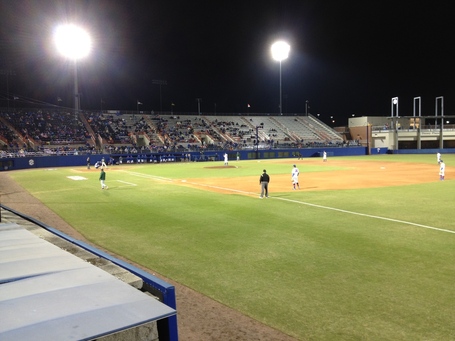 Both Miami’s Chris Diaz and Florida’s Jonathon Crawford dominated early, and were helped out by solid defense. Casey Turgeon, touted as the best defensive 2B in the SEC, showed a very quick turn on a 6-4-3 double play in the top of the first. Crawford, listed as the second best prospect in the SEC (along with best fastball and best breaking ball), lit up the gun, sitting comfortably in the mid-90s. All was smooth sailing for the Gators until the top of the 4th, when Alex San Juan launched a no doubter into the left field bleachers for a 2-0 Miami lead.

Of the other top prospects in this game, freshman Brandon Lopez really stood out at the plate, going 3-4 with three solid singles. However, he did make three errors at short (two fielding, one throwing). Hopefully this can be chalked up to growing pains. Dale Carey of Miami, listed as the #8 prospect in the ACC, was 0-3 with a walk and strikeout. Daniel Gibson, the Florida LHP considered one of the best arms in the SEC, had a rough night. He hit the first batter he faced before giving up a single to the second (and last batter) he would see on the night.

Because of the nasty weather, we left the game early and headed to The Swamp to catch the final few innings on TV while enjoying a Swamp Head Big Nose IPA. I would rate the beer as below average, but we were just happy to be indoors. By the way, Florida tied the game with two runs in the eighth before coughing up the lead in the ninth.

Judging by the box score, I’m glad we missed the first game of this series, a 23-5 rout of the Wildcats that saw the Villanova pitching staff throw 210 pitching in only eight innings. Wildcats ace Pat Young, who had a pretty good summer in the Cape Cod League, took the brunt of the beating. To sum up that debacle, I’ll turn to a text I got from a friend who was following the game back home: "Let me get this right, 22 hits, 11 walks, 2 HBP, 6 errors, and only 23 runs scored? Clutch two out pitching I guess." More keen text insights to come later.

On paper, this was indeed a lopsided matchup. Florida State was in Omaha last Spring, while Villanova missed the Big East tournament. The rest of the weekend would be determined by how well Villanova could forget Friday and rise to the challenge. Thankfully, they did just that.

Florida State plays in one of the finest stadiums I have seen in all of college baseball, Dick Howser Stadium. It features a massive scoreboard in left and the backdrop of the FSU Circus tent in right. And if you make an error at this stadium, the home crowd will be happy to remind you that the circus is next door. 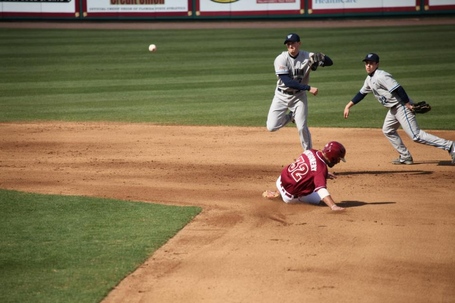 The real story of this game was JuCo transfer Marcus Davis of Florida State. He is a physical specimen, and plays like a man amongst boys with a beautiful lefty stroke. In the third inning, he reached for an outside changeup and lined it off the right field wall with only about half a swing. It seemed so effortless that you could hear a collective "wow" as the ball clanged off the fence. His presence was such that it felt like Florida State was threatening to score every time he stepped to the plate.

In the middle innings, it appeared that Villanova starter Stephen Ostapeck lost something on his ball. A text from back home notified me that he had lost his arm slot for a few pitches. Ostapeck soon worked through it, but not before surrendering two runs in the fifth.

Florida State starter Scott Sitz was dominant again, throwing six scoreless innings. He has yet to give up a run this season. Seeing Sitz in the bullpen before the game, I assumed he was a trainer or some kind of coach. He looks as unassuming as they come, generously listed at 5’10’’ and perhaps generously listed in the other direction at 210. But, coming from a short arm delivery, his stuff plays up and was very effective. He was beaten on a bunt single to lead off the sixth inning, after which I received a text saying "always try to make fat pitchers bend over a lot." Words of wisdom. 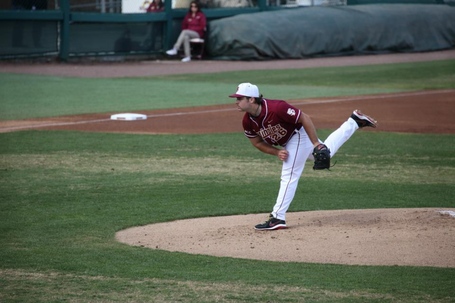 Sitz would get the last laugh, however, striking out nine and giving up only two other hits to Villanova. At every two strike count, the Nole faithful would start a K-Time! chant, which turned into Queso! for the eighth. Following the eighth strikeout, everyone in attendance was given free queso at a burrito place. Pretty good promotion, as it had us going there after the Sunday game and enjoying some free food courtesy of the Villanova hitters. One of the most frequent victims of the K was Nova first baseman Max Beerman, who at one point had struck out in six straight plate appearances. When you watch Beerman take batting practice, it is easy to see why the freshman is being giving a chance. The tall lefty has power for days, and will be a big time producer if he can get comfortable.

Sunday turned into a beautiful day for baseball, with high blue skies and a bright sun. The beauty of the day was heightened by Florida State’s gold uniforms that they have become so famous for. 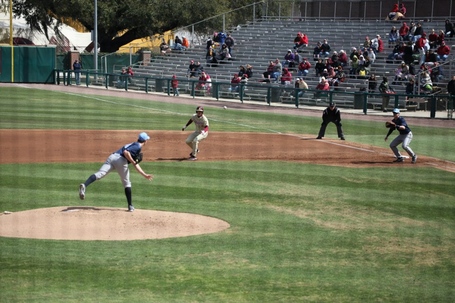 In the series finale, Villanova almost pulled off the upset, and revealed a few flaws in the Seminole team. First, they could not touch lefty starter Josh Harris who went seven innings allowing two runs (one earned) on just six hits and no walks. Second, Florida State needs to work on small ball. Harris picked off a base runner in the second, and almost had another picked off in the fifth. Most glaringly, Florida State popped two sacrifice fly attempts to the first baseman. Had Villanova come back to win this game, you could point to those missed opportunities. These mistakes are the kind that derail a run to Omaha. 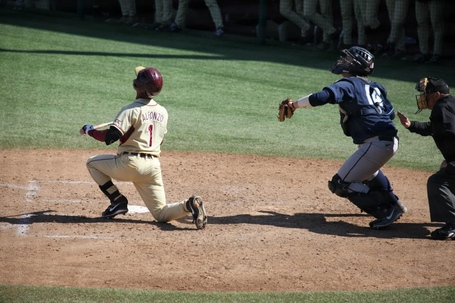 One of these failed bunts was made by SS Giovanny Alfonzo, who seemed overmatched by Villanova pitching on Saturday and Sunday (note: I was not there on Friday when he went 3-6). Florida State desperately needs their regular SS back, Justin Gonzalez. Gonzalez, one of the top prospects in the ACC, is out with a minor injury and should be back in time for conference play.

Florida State scored its first run on a balk, and was only up 1-0 as the crowd sang O Canada in the fifth inning. They would go on to hold the lead until the ninth, when things got a little bit hairy. Villanova loaded the bases with one out, but was only able to push across one run on a sacrifice fly. Freshman Jameis Winston shut the door on the rally with a strikeout of Beerman. Winston, one of the top newcomers to the ACC, also added a pair of hits as the DH. He has a good, athletic body but was not overpowering on the mound. 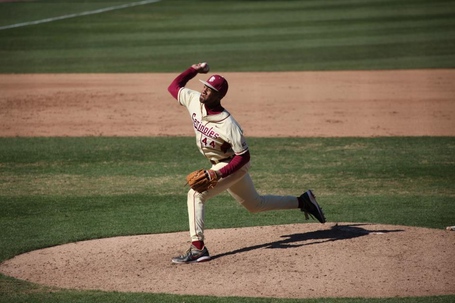 The final thought on the day regards FSU catcher Stephen McGee. He is considered by some a potential first day draft choice and is listed as having the best strike zone discipline in the ACC. Besides looking the part, he did not have an opportunity to do much at the plate. Behind the plate, he was athletic in blocking balls and showcased a strong (albeit somewhat inaccurate) arm in between inning throwdowns.