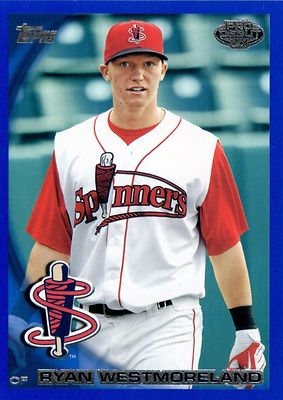 The Retirement of Ryan Westmoreland

Complications from a 2010 cavernous malformation in his brain and subsequent surgeries have made it impossible for him to continue as a professional player.

Westmoreland was drafted in the fifth round in 2008 from high school in Portsmouth, Rhode Island. He was considered a first-round talent with all Five Tools but a Vanderbilt commitment scared teams off; the Red Sox had to give him $2,000,000 to sign. I had him rated as a Grade B prospect entering 2009.

He made his pro debut in '09 with an excellent season for Lowell in the New York-Penn League, hitting .296/.401/.484 with 38 walks in 223 at-bats along with 19 steals in 19 attempts. He had an excellent combination of speed and plate discipline, along with substantial power potential and a strong glove. I had him as a Grade B+ entering '10 and he was one of my favorite prospects.

He was struck down in the spring of 2010. Despite two surgeries and his own vigorous rehabilitation attempts, he didn't recover sufficiently to play again. Fortunately his day-to-day functions have returned and from the sound of things he is going to pursue his education.

I know we all wish him the best of luck. Things like this should remind us not to take simple health and independence for granted.