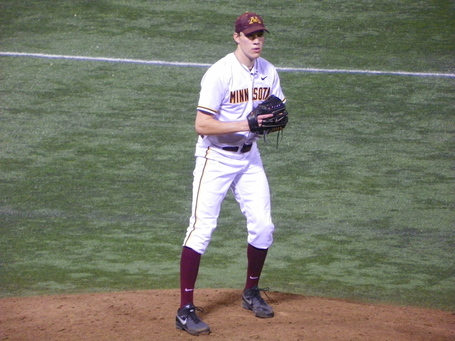 Friday night was a good night to watch baseball in Minnesota. That is a nearly unheard of statement at any time during the season, let alone March 15th.

Taking the mound for Minnesota was Tom Windle, a lefty who is a late 1st round to second round type of arm. Indiana State had Sean Manaea, a lefty who is in the discussion for the first overall pick. It was exciting for me to get away from my couch scouting and see a live game. It was 4.5 hours worth of driving, and honestly, a little underwhelming, but still a good time.

I got there not too much before the game started. There were a lot of scouts in attendance. I'm not in the loop enough to know who anyone is working for other than an Orioles scout, Cardinals scout and the Twins scouting director.

I was hoping to see the dominant stuff that I saw from Manaea at the Cape Cod League All Star Game but it wasn't there. He was 92-94 mostly with the fastball. He hit 95 on one pitch on a gun in front of me. He easily dominated Gopher hitters and didn't allow a hard hit ball until the middle innings and it was still an easy fly out.
I really thought he was done after the 7th inning but no one was warming up. His velocity was dropping and he was breathing like he was tiring. He did finish the game but dropped to the 88-93 range. That is impressive and shows he can sustain velocity that deep into a game.

Manaea's slider was mostly 78-82 and was an above average offering and flashed 3 or 4 plus pitches but it was not the nasty pitch he had on the Cape. He seemed out of sync. It looked good in the 4th inning but other than that, it was a guessing game.

His change was in the same velocity range but wasn't anything more then a show me pitch. It didn't move much and it needs to improve to be an average pitch in pro ball.

Physically, he was leaner then I thought and he takes a huge stride when he throws. He has very good deception in his delivery, so the 92-94 MPH velocity played up and when he was 97, I could see why he would nearly be untouchable. His low ¾ delivery adds to that.

On a more granular scale, his delivery is long and slow. Good base runners will take advantage of that. He has the silly Paco Rodriguez leg lift as he comes to the set. That drives me nuts but isn't a big deal in reality. His pickoff move is horrible. It's a balk move. He should have been called for at least one balk if not more. He looks like he decides mid delivery if he's going to throw to first or home.

Statistically, he struck out 9, walked one, gave up six hits, hit one batter and generally pounded the strike zone. He should with that stuff against this type of opposition.

Overall, he is more raw then I expected. His delivery isn't easy. He seems a bit awkward in his delivery at times. The arm is there and the slider shows a ton of potential. The change needs a lot of work. The smaller stuff will come with work and time. I see a guy with a big arm and enough stamina to be a starter. I see a guy with the stuff to be a reliever, though. The overall package, right now, isn't good enough to be a top 5 pick. If you want to project and have confidence you can fix the smaller things, he is. If you are looking for the college arm that just needs to face pro hitters, acclimate and move up and take a rotation spot in a year or so, this isn't the guy.

Tom Windle was a completely different pitcher. His velocity was average to above for a lefty at 88-92. He controlled it well and while he allowed a lot of contact, no one made much solid contact off of him. Yes, Twins fans, he pitched to contact. He just doesn't have that extra gear that Manaea has.

Windle has a slider that is a 78-82 MPH offering. It is an average pitch that he commanded well. His change is very good. It was in the 80-84 range but was thrown with the same arm speed. It kept hitters very off balance.

He didn't blow it by hitters like Manaea did. Hitters were able to make contact but most of the time they were weak grounders and rarely amounted to much. For this reason, he is more of a back of the rotation type, not a front line guy like Manaea projects to be. I liked the fact he worked inside and made hitters uneasy. He did hit two batters but not due to lack of control but more that the hitters were sitting on the dish and he wasn't going to not work his game. I appreciated that.

Physically, he is strongly built and could use his lower half more. His stride is short and he throws more over the top. He uses his shoulder and elbow a lot and due to that and he could have a couple more ticks in him if a team would want to tinker. I'm not a fan of that idea, just saying it's potentially an option.

I like Windle. He would be a solid pick in the late 1st round or the supplemental round. I think with his three big league average pitches, he could help any team that picks him. The problem is separating him from the wealth of college arms that could bunch up in the late 1st round.