NW State @ TCU in Ft. Worth, plus a short note about DBU's new park.

I'm trying a new format because I didn't like having a disorganized paragraph just spewing names out, so here they are listed in table form. Love it? Hate it? Let me know.

Lupton Stadium is quite difficult to get to with all the construction in the area. I zig-zagged between closed roads for about an hour Wednesday before I finally made it to the (free) parking lot. It was worth the wait. Beautiful, warm day with hardly a cloud in the sky. Even more wonderful, it was dollar day at the park. All seats were general admission, and all tickets were just $1. This is a great promotion, and it had a huge crowd at the park, especially for a midweek afternoon game. Reported attendance was 5,612, well above TCU's top 10 average attendance of 3,975. According to TCU this was the third largest crowd in stadium history. 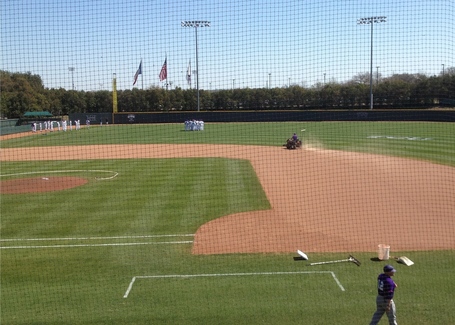 Watching the end of batting practice with the beautiful backdrop had me yearning to go grab my glove from my car and see if anyone needed a ninth. Maybe it is because this was the first warm weather game I've seen this year, but the immaculate grass and high skies reminded me just how fun baseball season is. Brought me back to my playing days, when I couldn't get any work done on game days because I could only focus on getting to the field.

This has been a disappointing season for TCU. The first two weekends they were swept at Ole Miss and at home by Cal State Fullerton. They've righted the ship since, and are nearing the .500 mark. Northwestern State has struggled as well with a 9-10 record. One thing I've learned as a Rice fan, however, is to never sleep on a Southland Conference team. Its never a good thing to see a Sam Houston State or McNeese State in your regional. 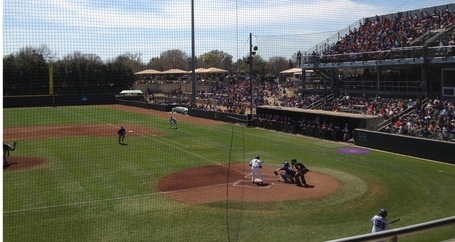 The game got off to a solid start for TCU, as their leadoff hitter Boomer White (playing catcher) singled sharply to center and took second base when the Demon CF bobbled the ball. Man on second, no outs, the .308 hitting Davy Wright tried and failed to sacrifice White third.

I was confused by this because 1) Northwestern State showed they will give you free bases with 11 walks Tuesday and 2) a leadoff man should be in scoring position on second. But, I was proven wrong I suppose when Wright singled to right with two strikes and White couldn't make it home. He was brought home on a sacrifice fly by Jantzen Witte. 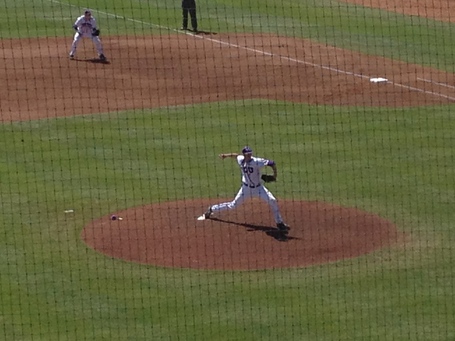 This was the season opener for DBU, and the opening of their new stadium, Horner Ballpark. Only note I have here is that this is one of the nicest facilities I've seen. It is a little bit small with a capacity around 2,000, but it fits perfectly on campus. Although it won't be a consideration this year, it is easy to see DBU hosting a regional very soon. 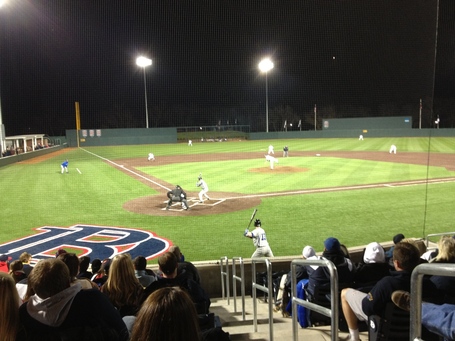 Coming up, I'm back home in Austin and will be taking in the Texas Tech-UT series. Lots of talent to see this weekend.