This weekend, I stopped by Tulane and LSU. Here are some thoughts.

Welcome to my second installment of in-person looks at some of the top college programs in the country.

This weekend I was in Louisiana, so I planned to take in High Point @ Tulane on Saturday and Washington @ LSU on Sunday. However, New Orleans has a funny way of making one forgetful, and I missed the Saturday contest that saw High Point top Tulane 4-2.

Tulane's starter Alex Byo tossed a complete game giving up only one earned run, but three unearned runs cost the Green Wave. Byo, a senior, tied for the CUSA lead in victories last season with a 9-4 mark. Jamie Schultz, listed by Baseball America as the #8 prospect in the Big South had a short stint that saw him have some command problems. He induced a groundout on a 3-1 count before walking the only other batter he faced.

Fearing a paycut if I didn't get to at least two games this weekend, I reorganized my schedule to catch part of the Sunday games at Tulane and LSU. This would be tricky considering they had identical start times and were taking place about 70 miles apart. I arrived at Tulane's Turchin Stadium as they were finishing the national anthem and caught the first three innings before driving to Baton Rouge in time for the seventh inning stretch at Alex Box. Here's what I saw: 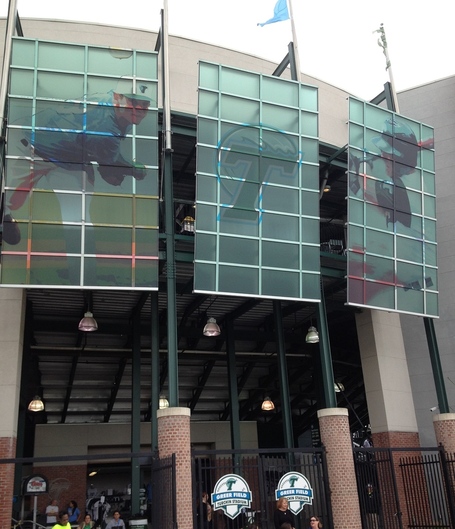 The first note here is that Tulane actually makes you pay $5 to park at the stadium. They are the only school I can remember that does this. LSU, Rice, Texas, Arkansas, Florida, Florida State, and everywhere else I've been has free parking. Maybe I just didn't look hard enough. Turchin Stadium is big and beautiful, seating 5,000 in a tribute to their great successes in the pre-Katrina era. It has a minor league feel, especially with numerous in-game promotions that seem cheesy and detract from the environment. Another big negative in my book is that the entire field save for the mound is field turf. Not a good look. Tulane went with their classic green on white look, while High Point uglied it up a little with grey jerseys with purple pinstripes.

Tulane got an out on the bases to stymie a rally in the second with a perfectly timed 7-5-4 relay throw following an RBI single just as I had finished explaining to my date how the catcher was directing throws from the outfield. Thanks guys for making me look smart, those moments don't come often.

Tulane has a number of players listed as potential draft prospects while High Point doesn't get much love. The Panthers did not have anyone drafted last year, but had two players selected in 2011, including Cody Allen who debuted with the Indians last July.

Neither team's starter made it through the fifth inning, and neither one looked particularly impressive from what I saw. Michael Heller (Baseball America's #10 prospect in the Big South) took over for the Panthers in the fifth and struggled. His final line: 0.2 IP, 1 ER, 2 BB, 1 hit (and another hard lineout to LF). Although I was not around to see it, freshman Ian Gibaut was excellent in relief getting the win for Tulane. He pitched 5 shutout innings allowing only three hits and one walk. Tulane Sr Brennan Middleton continued his hot hitting (.377 BA, .449 OBP), going 2-3 with 2 BB in the leadoff slot. He was also hit by two pitches and stole a base in the third. He's not listed on any prospect board I could find, but could be one to watch if he keeps up this pace. Garrett Cannizaro, listed by Baseball America as the #15 prospect in CUSA did not play, and has struggled to the tune of a .193 BA this season. Andrew Garner, listed by Big League Futures as a top college prospect, was 1-5 at the plate (.258 BA on the season) and gave up two hits in a scoreless third of an inning on the mound. 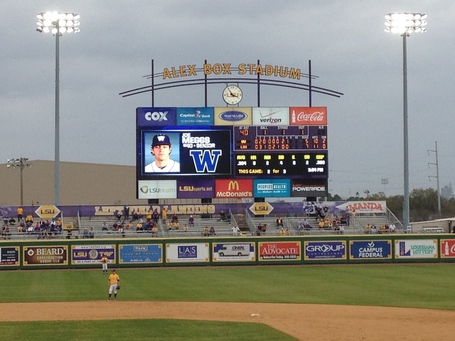 Alex Box is always a fun place to watch a game. The passion the fans there have for their team is obvious, and manifested itself immediately as the roar of the crowd was easily heard from our car as we pulled into the parking lot.

LSU looks to have another stellar team this year, and their 15-1 record backs up that observation. Their lone loss came to BYU on February 23. Not only can LSU always pitch and always hit, they flashed a little leather late in the Sunday game to stop a Husky comeback attempt. Sr 1B Mason Katz made a terrific diving backhand snag of a sharp groundball followed by a dazzling behind the back toss to pitcher Joey Bourgeois covering the bag. The next batter blooped a ball into shallow LF with a runner on second that had me muttering "there's a run" to myself. Then, out of nowhere, freshman SS Alex Bergman made a leaping over the shoulder catch to end the inning. 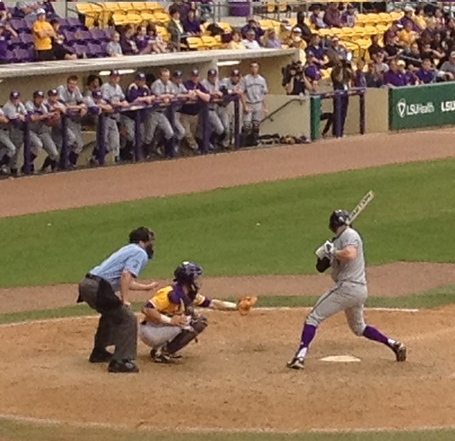 Katz, tabbed as the best raw power prospect in the SEC, was 1-4 with a two run shot in the second. Bergman, rated by Baseball America as the #2 newcomer to the SEC, was 2-4 with his second triple of the season. Probably the biggest sign of his potential is that he is slotted in at #3 in the LSU lineup. Jr Catcher Ty Ross, listed as a top prospect by Big League Futures, was 1-4 with a solo HR. JaCoby Jones, a top 50 prospect according to almost everyone, was 0-3 with a BB. Raph Rhymes was 1-4, and did not show much as DH in this game. I saw him play against Arkansas last year though, and I'm of the opinion that he will be able to hit regardless of the competition he faces. Nick Rumbelow, a top prospect according to Big League Futures, was throwing some gas out of the bullpen but was spotty (0.2 IP, 1 H, 1 BB, 2 ER, 2 Ks). They've got an scouting report on him here. 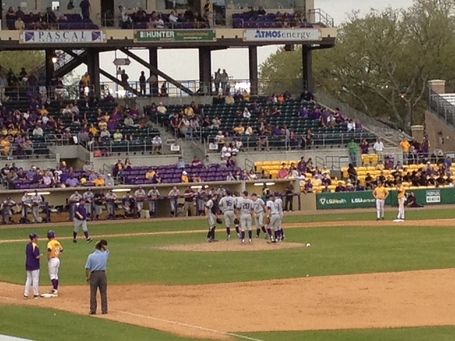 Pictured: Meeting at the mound prior to a Raph Rhymes AB. Fittingly, the PA was playing this song.

Washington's top prospect, Jr Austin Voth, pitched on Friday and was roughed up (3.1 IP, 6 H, 5 BB, 6 ER, 3 WP). I didn't see him, but here's a pretty good scouting report by MLB Dirt. Sophomore first baseman Trevor Mitsui, tabbed by Baseball America as the #9 prospect in the PAC-12 for 2014 was 1-4 including a hard lineout to 2B in the seventh.

One final thought: If you go to Baton Rouge for a game, stop by and visit Mike the Tiger on display near Tiger Stadium. He was not afraid to show everyone that he knew he was in charge: 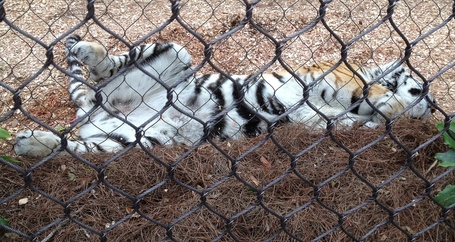 That's all I've got for this weekend. Give me some feedback in the comments if you like.