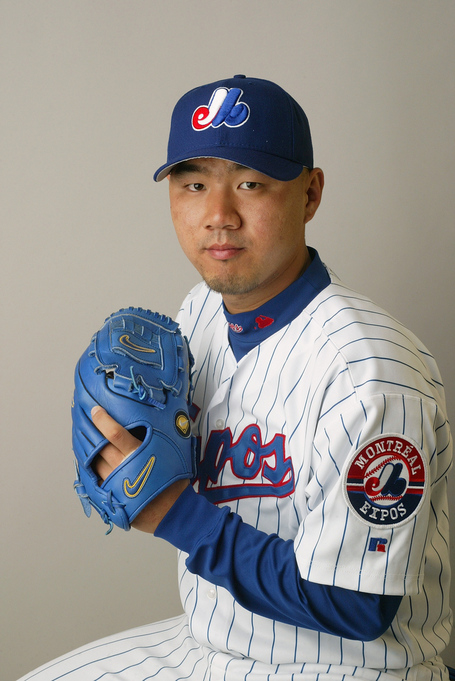 
Currently pitching for South Korea in the 2013 World Baseball Classic, Seung Song was, at one time, one of the best prospects in North American baseball. Yet he never pitched in the majors. What happened? The winner of last week's Off Topic Airplane Blogging contest wanted to know, so let's take a look.

Song was signed by the Boston Red Sox as a free agent in 1999, earning an $800,000 bonus. He was a first-overall pick in the Korean Baseball Organization draft, but he wanted to play in North America. His pro debut was very solid: 2.30 ERA with a 61/20 K/BB in 55 innings for the Gulf Coast League Red Sox. Scouting reports pointed to a good low-90s fastball and promising secondary pitches, but he needed polish and experience. I gave him a Grade C+ in my 2000 book, noting a high ceiling but that he had a long way to go.

Moved up to Lowell in the New York-Penn League for '00, he was extremely effective with a 2.60 ERA and a 93/20 K/BB in 73 innings with 63 hits allowed. His control was sharper and he was making progress with a changeup and curve to go with his low-90s sinker. I moved him up to a Grade B entering 2001, writing that "my feeling is that he will do well if he stays healthy."

He continued to do well: 2.04 ERA with a 79/18 K/BB in 75 innings for Low-A Augusta, then a 1.68 ERA with a 56/18 K/BB in 48 innings for High-A Sarasota in 2001. He now had a refined, plus-quality curveball and an impressive changeup to go with the fastball, with continued praise from scouts for his makeup and mound presence. He gave up just four homers all season. He was up to a Grade B+ for me now, projecting him as a number two starter. I had him as the Number 18 pitching prospect in baseball.

The Red Sox sent him to Double-A for 2002. His ERA skipped up to 4.39 but his other numbers remained solid, with a 116/37 K/BB in 109 innings and 106 hits allowed. Scouting reports continued to show three strong major league pitches and a good feel for pitching. He was the key prospect in a mid-season trade with the Expos, as part of the Cliff Floyd deal.

Song made one start for Double-A Harrisburg, then went on the shelf with a sore shoulder and missed the rest of the season. The injury was not supposed to be a big deal, and I kept him with a Grade B+ entering 2003, ranked 33rd on the pitching prospect list and writing that we would see him in the majors soon if his shoulder was OK.

His velocity was down, his fastball going from 90-95 MPH down to 87-91. HIs breaking stuff wasn't as sharp, and the loss of fastball velocity made his changeup less effective. Although he didn't go on the DL and the Expos kept running him out there, there were rumors that he was attempting to pitch through more shoulder problems. Statistically, his K/IP ratio was much lower than in past seasons. The Expos didn't promote him to the majors for September.

Concerned about the stats, velocity drop, and the injury rumors, I lowered his rating to a Grade B- entering 2004, writing that "I'm worried that the dropping K/IP is a precursor to a serious problem."

It was. Shoulder problems and continued velocity decline limited Song to 85 innings in '04, split between three levels due to rehab, with a combined 4.78 ERA. His reputation as a prospect collapsed very quickly, evaporating with his fastball and the Expos cut ties quickly. He was picked up by the Blue Jays on waivers, then the Giants.

He threw 128 innings at three levels for the Giants system in '05 and posted a combined 3.16 ERA, but his K/BB in Triple-A was poor at 37/36 and by the end of the season he was considered "no prospect" by most observers.

From top prospect to nothing in two years: it happened that fast.

He was let go as a minor league free agent, signed with the Royals, and had a bad year in Double-A with a 5.37 ERA. 99/70 K/BB in 131 innings. I saw him pitch that summer and he was a ghost of his former self, struggling with command, working at 87-90, and lacking life with his secondary pitches.

What happened? Simple case really: the bout of arm trouble in '03 and '04 cost him his best stuff and he was never able to fully compensate.

Song went back to Korea to pitch for the Lotte Giants, and that was that for his career in North America. He did make a name for himself in Korea, pitching in the 2008 Olympics and being named to the KBO All-Star Game in 2012, plus the World Baseball Classic this year.

Song's case is one of the reasons that I tend to be very cautious about any hint of injury in a pitcher, even if it is supposed to be "no big deal," especially if it concerns the shoulder.