Finding the Next Yoenis Cespedes

Share All sharing options for: Finding the Next Yoenis Cespedes

The Cuban Outfielders: Looking for the Next Yoenis Cespedes

There are three top Cuban outfield prospects who should see the majors in the next few years: Leonys Martin of the Texas Rangers, Yasiel Puig of the Los Angeles Dodgers, and Jorge Soler of the Chicago Cubs. Can these guys duplicate what Yoenis Cespedes did for the Oakland Athletics in 2012? Cespedes hit .292/.356/.505 with 23 homers and 16 steals in 487 at-bats, with an OPS of +137, wRC+136, posting a 3.1 WAR.

Major league teams have invested more than $86 million in these three players. Here is my take on each one, starting with their comment in the 2013 Baseball Prospect Book and expanding from there with additional comments. 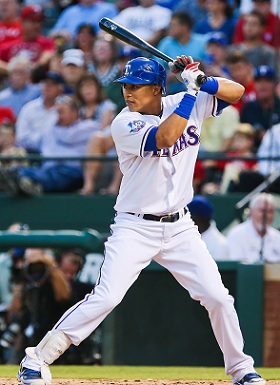 A Cuban defector, Martin signed a major league contract worth $15.6 million in May, then zipped quickly through the Rangers farm system. He performed well in Double-A but seemed overmatched at times against Triple-A pitching, not driving the ball effectively at that level. Martin makes contact and has gap power, but his best attributes are speed and defense. He has the range and arm strength to handle any outfield position, and he is dangerous on the basepaths. Scouts aren't sure how much home run power he'll show, although no one expects he'll be a big slugger, and even opinions about his on-base abilities are mixed. Some believe he'll be a mainstay at the top of a major league lineup and contend for gold gloves in center field, while others believe he'll settle in as a fourth outfielder. The Rangers buy into the first scenario. Grade B.

We have some answers now. Martin made the necessary adjustments to Triple-A pitching and tore up the Pacific Coast League last summer (wRC+164), although he missed a month with a thumb injury. He saw sporadic playing time in the majors, hitting .174/.235/.370 in 46 at-bats, just enough to develop some frustrating rust perhaps, but given consistent at-bats I think he'll adapt to the American League as well. He isn't going to be a walk machine, but should hit for average while providing moderate power and sound defense in center field. I don't think he's a superstar, but Martin should be better than a fourth outfielder. Grade B. 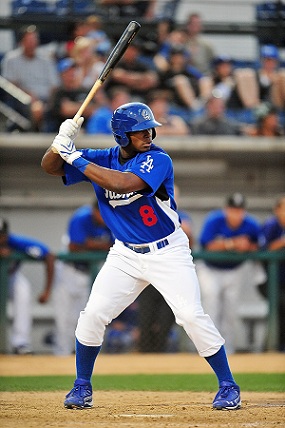 Using some of their new-found financial resources, the Dodgers signed Cuban defector Yasiel Puig to a seven-year contract worth $42,000,000 last June. There was mixed opinion about this in the baseball world: some scouts felt that Puig was too raw and risky to be worth that kind of money, but the Dodgers see him as a possible superstar. The early returns are positive: he butchered sacrificial lamb rookie ball pitching (.400/.500/1.000 in 30 at-bats), then looked very good in two weeks of play in the more-appropriate California League (.327/.407/.432). Puig features enormous power, above-average speed, and a strong throwing arm. His plate discipline was quite good in his debut; granted the sample is small, but at least it was a positive sign. His fielding and baserunning skills are rough and will need to be polished, but that's small potatoes compared to his impact hitting potential. There are some questions here and Puig has risk. Is he really 22? Were the numbers at Rancho just a Cal League small sample fluke? Even accounting for those issues, he looks like a Grade B+ guy to me, balancing the tremendous upside with the undoubted risk. 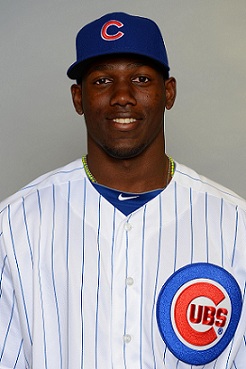 A Cuban defector, Soler signed a free agent contract worth $30,000,000 over nine years last summer. He spent two weeks working off rust in rookie ball (.241/.328/.389 in 54 at-bats), then moved up to the Midwest League and crushed Low-A pitching for three weeks (.338/.398/.513 in 80 at-bats). All told, it was a very successful debut. Soler is a chiseled athlete with outstanding raw power, above-average speed, and a strong throwing arm. He demonstrated all of those tools in his first pro look, and he showed good skills once he got settled in. Although he could use some polish with the strike zone, his pitch recognition skills weren't terrible. He kills fastballs. Breaking balls will cross him up sometimes, but note his very low strikeout rate for Peoria. Granted the sample is small, but a low whiff rate like that, combined with huge power, is a strong sabermetric marker. Soler also needs more experience on defense, but his range and arm strength will work well in right field. Assuming Soler's listed birthday is correct, he looks like a helluva prospect to me. Grade B+, and that might be too conservative.

I like all three of these guys. Right now, I have Soler ranked the highest, slotted in at #23 on my Top 50 Hitting Prospects list. Puig isn't far behind at #29, with Martin checking in at 45.

Martin is the most polished hitter of the trio, which makes sense since he is also the oldest at age 24 (25 in March). Martin is also the most contact-oriented, although I think he has a bit more home run pop in his bat than people think.

That said, both Puig and Soler have more home run potential than Martin and you could give both of them a 70 raw power grade. Both Puig and Soler showed good plate discipline in their debuts, though it remains to be seen if they will maintain that against better pitching and advanced breaking stuff. Scouts aren't sure their batting averages will hold up.

All three run well, with Martin having the most current speed and the greatest likelihood of maintaining the speed as he gets older. All three have above-average arms, with Soler and Puig fitting the right field profile more classically than Martin. Martin is the best overall fielder and most likely to stick in center field.

In my view, both Puig and Soler have higher upsides than Martin due to their greater raw power potential, but they also lower floors. Assuming their listed birthdays are correct, Martin is the oldest and has the least room to grow, but he also has nothing left to prove in the minors and his skills are the most polished.

In my mind, both Puig and Soler profile very similarly to each other. I can see them turning into something very much like Cespedes, or like the 1994-1997 version of Sammy Sosa. I put Soler slightly ahead because he is younger than Puig, plus there are some questions about Puig's makeup. Depending on what they show in spring training, both Puig and Soler will probably begin 2013 in High-A. Martin is ready to contribute in the majors right now.