An Outsider's View Inside the Winter Meetings

After spending almost a week with the brightest minds in baseball, here are a few things that I have learned.

Share All sharing options for: An Outsider's View Inside the Winter Meetings

Every year in the midst of Winter, members of the front offices of every major league team come together to talk baseball. This is the winter meetings that you see on MLB Network and ESPN. There is an entire different side of the meetings that rarely garner much attention. For one, you have about 400 people there with the sole intention of getting their foot in the door in the business of baseball. Be it as a play-by-play broadcaster, promotional manager or just a salesman, they all have the same goal of gaining employment of one of the 160 minor league teams. This was my intention going into the week. You also have the business side of the game with the Baseball Trade Show. Here is my account of my time spent in Orlando at the Winter Meetings.

The PBEO Job Fair is run by some great people whose sole job is to find us job seekers employment in affiliated baseball. They set everything up on location and make sure things run like clockwork. They also did a great job of informing those of us who were there for the first time how everything is done. The first thing you do is the Business of Baseball Workshop. It was an all day event that started at 8:15 AM and ran until 4:30 PM. They bring in some of the best in minor league baseball to speak with us on a variety of topics. It ran the gamut from preparing for our interviews to how everyone got their start.

The emcee of the day was the President of the Scranton/Wilkes-Barre RailRiders, Rob Crain. He was informative while keeping everyone entertained with his hilarious stories. Speakers included Lee Folger, President and Publisher of Baseball America; Giovanni Hernandez, Manager of International Baseball Ops for MLB; Pat O'Conner, President and CEO of Minor League Baseball; and Todd Parnell, VP and COO for the Richmond Flying Squirrels. Each spoke on different topics but a few themes stayed true. Things like "working for a minor league team, you don't sell the game of baseball, you sell the experience of a minor league game." and "You always represent the company, 24/7." The one that rung true the most for me was "Put yourself out there and don't be shy." 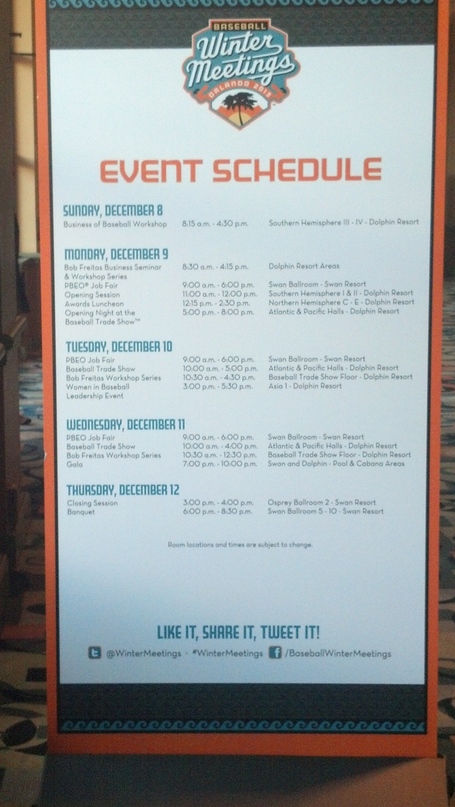 After the workshop they opened up the Job Posting room where about 250 jobs were posted on cork boards. One posting was for an Assistant GM gig for a short season team in the Northeast. Another for a Midwest League team listed job responsibilities including cleaning bathrooms, the seating areas and concourses. For that lovely job, you were able to be paid $750 per month. In addition to those duties, you would also be tasked with helping the sales department by selling season tickets or advertising.

This was a common theme which was stressed to us in the initial workshop. No matter what position you are seeking with a minor league club, you will be selling, no matter your job description is. I definitely did not realize this coming into it. My situation was a bit different. I was looking for positions in which I could help my writing career. Luckily, there were about four of these available. Unfortunately 25% of my opportunities required the knowledge of Japanese, which I am completely unqualified for.

Once a job seeker found a position they liked and were hopefully qualified for, it was time for the waiting game. Every 30 minutes Monday through Wednesday, new jobs were posted in the Job Posting room and the Interview Room was updated. The Interview Posting Room was similar to the Job Posting room. Instead of jobs, the teams chose their potential candidates and allowed them to sign up for a time to interview. Interviews were either done in a sectioned off part of the ballroom or were done somewhere in the hotel. All this was done at the Swan Resort, while all the team executives were over in the Dolphin Resort.

From Monday through Wednesday, prospective job hunters could either wait in the workroom next to the Interview Posting Room or wander the resorts meeting people from all walks of baseball. I did a little of both, mingling with other job seekers and meeting some of the biggest names in baseball. In my earlier post while I was there, I mentioned getting to meet Peter Gammons, Ken Rosenthal, Jon Heyman. Each of them gave me great advice about breaking into the industry. Mr. Gammons (surprise!) gave me the best advice though, telling me that no matter what, always keep writing. Just like in baseball, if you have the talent and are willing to put in the hard work, people will take notice and you will get to where you want to be. 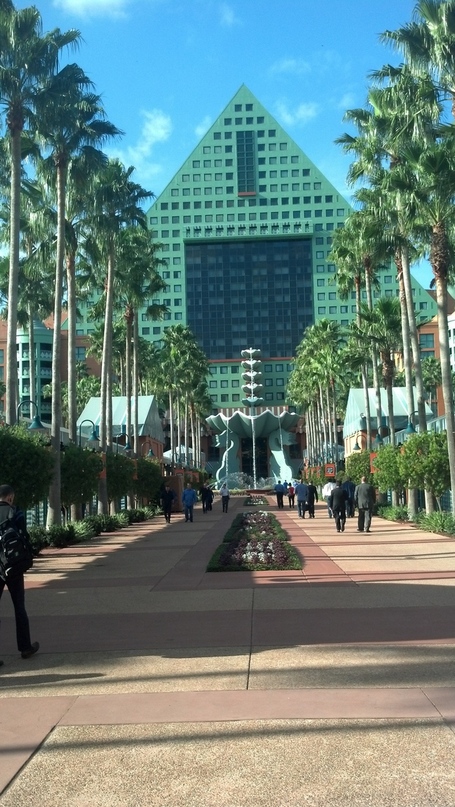 Along with the Job Fair, the Baseball Trade Show kicked off Monday night. Men and women from all over the country come together to network and show off their newest and greatest products. Baseball bats, apparel, netting, even novelty helmet cups were being shown off in hopes of landing a contract with a team. One of the coolest things I saw was the HitTrax system. HitTrax is an indoor baseball simulator that you can read more about by clicking here. Among other really cool things were the FreeHand Stadium Trays. They are a "...corrugated box concession tray which allows for a painter's palette grip with the thumb hole, which is strategically placed to allow for greater space on the tray and greater load carrying and balance..." as described by Larry Mack of FreeHands.

While checking out all the goodies, I came across the Tucci Lumber booth and had a chance to meet former Yankees catcher Jim Leyritz and the owner Pete Tucci. I also met Kevin Gnacinski, the Head Lathe Operator for BWP Bats, who can make you a bat to your exact specifications for a VERY reasonable price. It was good to see Leyritz back working in baseball again after reading his book Catching Heat.

All in all it was a great experience to take in. Most of the people I met were very nice and approachable. I do want to give a shout out to Letty at Louisville Slugger real quick for being an awesome dude. He bought me drinks all night and introduced me to countless folks in the industry. There's a certain amount of nervousness that happens when you meet in person someone you've only read online and seen on TV. More so when you meet a living legend like Peter Gammons, Curt Schilling or Billy Beane. I was able to do all this and wouldn't trade this experience for anything. Wallet-permitting, I hope to make the trip next year when they host it on the other side of the country, San Diego. Even if you are not trying to get into baseball as a job, just going and hanging out in the lobby and by the bars is an experience you can't get anywhere else. Well, not until next year...