Arizona high school lefty Alex Verdugo is a high end talent on the mound and at the plate, and is projected to go early in the 2014 MLB draft.

Verdugo is a 6'1", 190 LB left handed pitcher and outfielder. He is arguably the best two-way player available in this draft along with Michael Gettys. I'm not sure at this point where he should play. Similar to Trey Ball last year, he has high-end tools both on the mound and in the outfield.

His speed is just average, so I don't see him sticking in centerfield long term. His thick legs look more like the legs of a pitcher than an up the middle talent. Once he matures he'll likely be a right fielder so the bat has to be very good, but the bat is that good. He can hit the ball with authority from line to line. He has a strong build but doesn't have a lot of physical projection remaining.

He has a toe tap and a big stride to trigger his aggressive swing. He tones it down in game situations but doesn't lose the aggressive swing. He has great hand eye coordination and can hit the ball hard to all parts of the field and he seems to have a good idea of what to do at all times. He has a fast bat that is short to the ball and long through it allowing him to have good contact ability and project for power as well.

On the mound, he has a simple, clean delivery. His fastball sits in the 88-90 range and I have seen it up to 92 with very good movement. He throws from a ¾ angle that helps his 75-78 MPH curveball have very good depth and two-plane break. It has tight rotation and could be an above average pitch. He occasionally throws it slower and it hangs some in the low 70's. He shows a change in the 78-80 range that could be an average or better pitch as well.

If I had to choose, I'd put him in the outfield but athletic lefties with three pitches don't come along that often. If he sits in the low 90's regularly and touches higher, he may end up on the mound. However the spring works out for him, he has the talent to be drafted in the late first to early second round. If he slides or doesn't sign, he is committed to Arizona State where he could be a star in the outfield and on the mound. 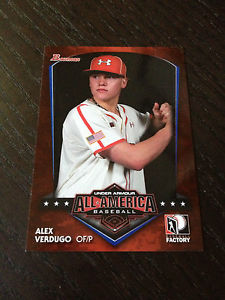