In which the writer brings his brain back on line

Share All sharing options for: A Personal Concussion Odyssey

October, November, and December were all plotted out. I would write the 2014 Baseball Prospect Book. I would produce the annual Top 20 Organization Prospect lists for 2014, beginning with the Minnesota Twins and the Atlanta Braves. We would have our annual organization discussions and debate, and it would be a grand old time at Minor League Ball: next to the June draft, the October/November/December/early January window is our busiest time of the year.

That was the plan, the same plan we've followed for eight successful years. And it got off to a good start with the 2014 Minnesota Twins Top 20 Prospects list.

The day before that list was posted, the Universe let me know that this fall and winter would NOT go as scheduled.

My wife bought a wall hanging last year, a nice metal sculpture, seen below. It hung near our front door stairwell. 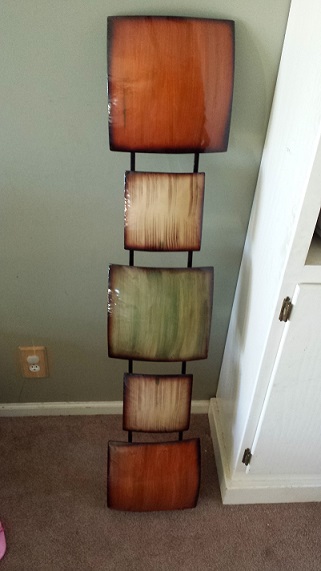 I was at the bottom of the stairwell one day, telling my wife that I was going to the store, when my younger son came to the top of the stairwell and knocked the sculpture off the wall. This was not a malicious act on his part: he likes the sounds it makes when he would tap it against the wall. Except this time he didn't just tap it. It wasn't secured very well, and it came off the wall completely, fell down the stairwell (about a four foot drop) and struck me square on the left temple of my head.

The impact had enough force to dent the sculpture, as you can see below: 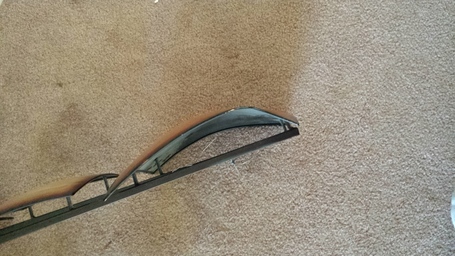 Needless to say, that hurt. It hurt a LOT. But I lied down for awhile, and the pain went away, and I didn't think anything more about it, other than thanking the universe that I wasn't hurt worse and didn't lose an eye or something.

The next day the migraines started.

I put up with them for awhile, but they kept getting worse. By that Friday I was in the ER and the doctors were doing a CAT scan. The results were negative for any permanent damage, but they said I had a concussion and needed to "take it easy" for a couple of weeks. I was told to go to my physician for a follow-up a week later.

The symptoms just got worse. Eventually it wasn't just a migraine. I had a feeling of pressure in my head, not pain, but pressure, although the pain was there too. I began having problems finding words. My emotions got very strange, with inappropriate responses to innocuous situations. It became harder and harder to write properly.

My doctor said this was all normal, post-concussive syndrome, and the best thing to do was eliminate all stress and excess brain stimulation, stop working, etc., otherwise I risked the symptoms lasting longer and becoming more serious.

As I noted in updates on October 23rd and October 28th, I was really struggling with this on a personal level. I would rest some, the symptoms would partially abate, but then I would try to work or write or do something for the family and it would all crash down, worse than I would publicly admit. By last week, I had to admit that I was in serious trouble schedule-wise and gave you the November 5th update that the book would be late.

By the middle of last week I was a complete wreck to be honest. My doctors were saying that I MUST cease all activity to recover. But I found this impossible to actually do, and the symptoms were getting worse, with cognitive and emotional functions a particular problem.

Finally, my wife Jeri broke the impasse. She called her brother Joe Jackson who lives in Missouri, on a nice quiet acreage in the country. No noise, no kids around. She explained the situation, and Joe and his wife Karen graciously agreed that I could come and stay there until I felt better. Jeri told me that I had no choice in the matter, and that I was not to take any baseball material with me or try to write anything at all. She forbade me to even read about baseball or politics or anything that might get my brain working too hard. No movies, no TV, and only enough internet access to remain in touch with family. If I wanted to read something, it would have to be light reading and about nothing serious. Mostly she wanted me to sleep.

I bowed to her wisdom and I disappeared last Thursday night. I slept most of Friday and Saturday. My other brother-in-law Dan is a physical therapist and gave me a neck adjustment Friday night, which didn't do much for my head at first but did restore some of the muscle mobility in my shoulders that I had lost after the concussion. I got around a little bit on Sunday, went to town with my nephew Mike for some coffee and a piece of pumpkin pie, but mostly just kept quiet.

I came home yesterday, and the improvement has been remarkable. I haven't had a migraine since Saturday morning. The pressure feeling in my head is about 90% better. My emotions are back on line and appropriate again. I can listen to music without my head exploding. I can simply talk without struggling to find the right words. And I can organize and simply write again. Five days ago, I was incapable of creating this article, not just writing it but even the process of conceiving it, taking the photos, and organizing the information wasn't merely beyond me, it would trigger an absolute sense of panic.

In short, I am myself again. When the doctors said I needed complete rest, they meant complete rest. Thank God for my wonderful wife for figuring out a way for me to get that rest, and God bless Joe and Karen and Dan and Mike for helping me out.

I am not 100% yet. I tire easily, and this article will wipe me out for the day. I have no real idea what has been going on in the baseball world. I paid almost no attention over the last week, and the weeks before that are more of a blur than anything: I was not absorbing or understanding information as normal. I have a lot of catching up to do.

But I'm home again, and I am myself again. I looked over some scouting reports this morning, and my mind is already busy at work cogitating and analyzing instead of throbbing and screaming "no!".

My goal now is to catch up on baseball news. Getting the blog back up to speed is priority one, and resumption on the 2014 book priority two, although the two things are of course interlinked. As the schedule on the book becomes more clear, I will update you.

I would like to thank the folks at SB Nation and Vox Media for being extremely patient with me over the last month. This is truly an outstanding company to work with. I want to especially thank Nick Melotte, who has kept the daily discussion threads going with excellent coverage of the Arizona Fall League. Thanks are also due to Lee Warren and Matt Garrioch for their valued contributions.

I must especially thank you, the ever-patient readers, especially those who have pre-ordered the 2014 Baseball Prospect Book. I want to thank everyone who has sent supportive messages and tweets over the past weeks.

But most of all I must thank my wonderful wife Jeri, who knew what I needed and made it happen. I was lost out their in space somewhere with a blown command module, but thanks to her wisdom down at mission control, her crew is home and back on duty.