Kansas City Royals pitching prospect Jake Odorizzi made his major league debut against the Cleveland Indians Sunday afternoon. It was a qualified success: he threw five shutout innings to begin the game, but yielded three runs in the sixth inning on the way to a bullpen-mutilated 15-4 loss. Odorizzi is expected to make one more start before the season ends, positioning himself for a shot at the starting rotation in 2013. Let's see what the Royals have here.

Odorizzi was originally drafted by the Milwaukee Brewers in the supplemental first round in 2008, the 32nd overall pick, from high school in Highland, Illinois. An outstanding athlete, he was a multi-sport star in high school who also played shortstop when he wasn't pitching. After a couple of workload-cautious summers in rookie ball, the Brewers assigned him to Low-A Wisconsin in 2010, where he thrived with a 3.43 ERA and an excellent 135/40 K/BB in 121 innings.

Odorizzi was a key component of the December 2010 Zack Greinke trade. He got off to a great start in 2011, posting a 2.87 ERA with a 103/22 K/BB in just 78 innings for High-A Wilmington. Promoted to Double-A Northwest Arkansas by the Royals, he scuffled at times, seeing his ERA elevate to 4.72 in 69 innings, with a 54/22 K/BB ratio. Excessive home runs where the main problem: he gave up 12 dingers. 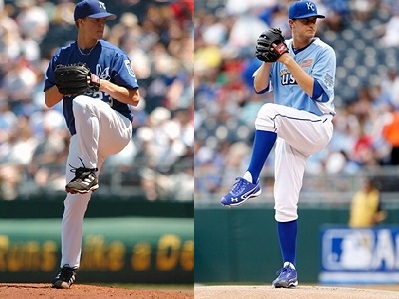 
Jake's fastball tops out at 94 MPH; it maxed at 92.7 in his major league debut but I've seen him as high as 94 (rarely 95) in the minors. He is aggressive with the fastball and not afraid to use it; he usually doesn't shy away from hitters. He has three secondary pitches with a curveball, changeup, and slider arsenal. The curve is his best secondary, the slider the weakest, with the changeup occupying a middle position in both quality and frequency of use.

Check out this Royals Review piece by Craig Brown regarding Odorizzi's debut and how he located his pitches.

Odorizzi is an excellent athlete with a clean and easy delivery, and he's had no problems holding up to a professional workload so far. His makeup and clubhouse presence are considered positives. His biggest weakness is a tendency to work high in the strike zone: he is a definite fly ball pitcher, and vulnerable to home runs when he makes a mistake.

With little left to learn in the minors, Odorizzi should be considered a favorite to earn a rotation spot in 2013. Although I don't think he will be a genuine ace, he should be an efficient and effective number three starter. I have liked him since his high school days, and nothing he's done has changed that.