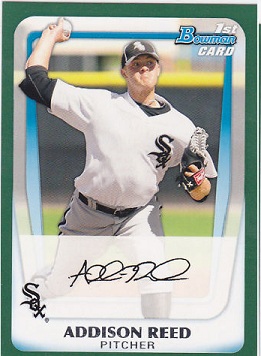 In just one year, Chicago White Sox relief prospect Addison Reed rose from college ball at San Diego State, to Triple-A and the cusp of the major leagues.

Reed was seen as a possible first round pick in the early spring of '10, but he didn't throw as hard as a starter as he did in relief, which hurt his stock slightly. The White Sox drafted him in the third round, then moved him back to the bullpen last year in the Pioneer League, with excellent results (1.80 ERA, 44/6 K/BB in 30 innings, 17 hits). There was talk of Reed moving back to the rotation for 2011, but the White Sox decided he would move more quickly in relief, and their judgment looks justified.

Reed began this year with Low-A Kannapolis but didn't last long: he posted an 11/1 K/BB in eight innings with four hits allowed. He remained dominant after moving up to High-A Winston Salem: 1.59 ERA in 28 innings, 39/4 K/BB, 21 hits allowed. This earned him a jump to Double-A in June, and he was even more effective for Birmingham, with an 0.87 ERA and a 33/6 K/BB in 21 innings with a mere 10 hits allowed. He moved up to Triple-A Charlotte last week and has fanned 11 in his first six innings, allowing one hit and zero walks.

Reed threw 88-92 MPH last year when used as a starter for the Aztecs, but in the bullpen he threw 91-95 MPH in the Pioneer League and has been a tick higher this year, in the 94-97 range. He has outstanding command of the fastball, and mixes it with a superb slider, one of the best breaking pitches in the minors. His changeup is inconsistent, but in the bullpen the fastball/slider combination has been enough for him to dominate. His ratios have remained excellent at every level, with no deterioration in his K/BB or K/IP ratios. Although Reed has saved just three games this year, he has the command, stuff, and mound presence to close games.

Rumors from Chicago indicate that Reed is on the fast track and he could see the majors in September, just over one year after being drafted. Even if that doesn't pan out, we should see him in the majors sometime in 2012.